The Seybold Dry Goods Co. was founded in 1877 by George W. Seybold in a little room located at 313 Market street. Later on his three brothers, J. Abner, Oscar M. and H. Sylvester, were added to the firm. The building at 421 E. Market marked the sixth time the rapidly increasing business  necessitated more space.


In 1915 construction began for a beautiful building at 421 E. Market. (Note: this location as of 2015 houses The Gallery Home Furnishings.) 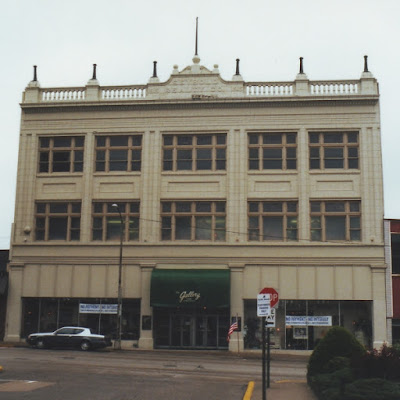 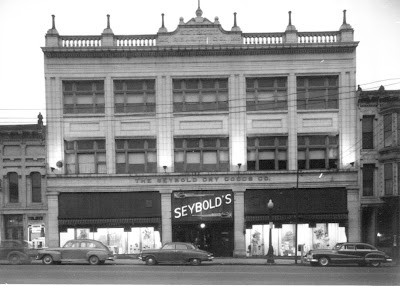 Logansport Journal & Times February 23, 1916, page 2
“We expect to get into our new building by the 25th of March," declared George W. Seybold, president of the Seybold Realty Company in an interview last night. "We have the building completed now with the exception of laying the first floor, putting in the front and the installation of the furniture.” He went on to say that they would be hiring more personnel and added "Everything has been arranged and all the merchants on either side of Market Street from Fourth to Fifth and on either side of Pearl Street have consented to install the large cluster street lamps similar to those on (E.) Broadway now. These lights will be installed by the time we get into our new building if the weather will permit.”

Logansport Journal & Times March 19, 1916, page 2
Four firms have sent propositions to J. D. Ferguson for getting the lease on the rooms occupied by the Seybold Dry Goods Company, when they move to their new location. All of the applicants are out of town merchants. The lease on the building has expired, but the rooms will not be empty until after May first, when the Seybold Company is planning to move.

Logansport Times May 26, 1916, page 1
The culmination of over a year and one half's work by architects, contractors and furnishers was shown to the public for the first time Monday of this week when the new Seybold building was thrown open to the public.

George Seybold (1850-1924) opened his first dry goods store in Logansport, Indiana at 313 E. Market. He was 27 and had a meager capital of $900. (Note: this would later become the location of the Greensfelder Brothers building - no longer standing.) 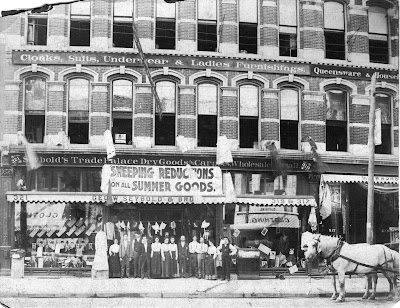 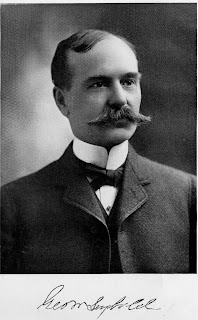 Posted by Museum Director T Conrad at 12:43 PM No comments:

Located at 430 E. Broadway in Logansport, Indiana, this three-story building, described as Romanesque Revival was built in 1893-94.
Logansport Times, issue date September 22, 1893, page 5: "Architect (Joseph E.) Crain plans for a handsome three story brick business block 22 by123 feet to be erected by I (Isaac) N. Crawford on the site of the old frame at the northwest corner of (E.) Broadway and 5th."

﻿
By 1919 John C. DeWenter had moved his already thriving business into the building. He'd been doing very well selling "Hats and Furnishings - clothing - trunks and travel bags". Soon the large structure was locally referred to as "The DeWenter Building".

Somewhere between 1930 and 1937 the building became home to a new business; Miller's. This business advertised women's fashions.
﻿﻿﻿ 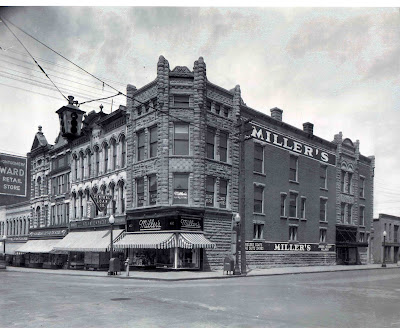 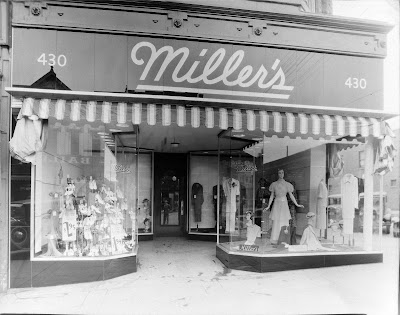 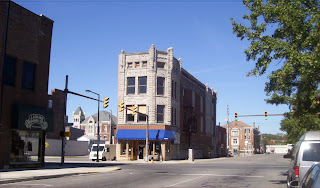 The building sat empty from 1967 to 1973. From 1973 to 1975 Craig Drug conducted business there. From 1976 to 1978 it housed Broadway Billiards, then sat vacant until McKinney Appliance opened in 1980. By 1985 Sportland Toys and Gifts was in the building. By 1990 it stood vacant once again.
As of 2015 the building stands alone as buildings next door fell victim to the wrecking ball over the years. It is currently the home of Broadway Tobacco.﻿
﻿
﻿
Posted by Museum Director T Conrad at 12:11 PM No comments:

The "J. B. Lynas" building stands at 519-523 E. Market in Logansport, Indiana.  Note the letters J B L at the top of the building. This commercial building "Twentieth Century Functional" according to the Cass County Interim Report of 1984 was erected about 1910. 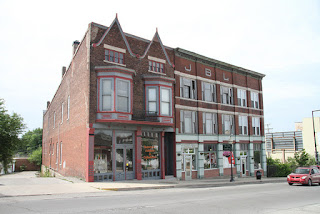 Dr. James B. Lynas (1835-1901) was born in Dearborn Co., Indiana on February 14, 1835.  At age 17 he studied medicine. James arrived in Logansport, Indiana in 1861. By 1866 he had started his own profession, which was the making of "family remedies", which quickly gained popularity. So popular, in fact that he began an extensive sale throughout the entire United States! 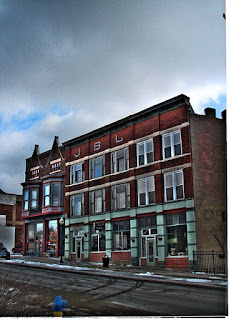 By this time he had expanded his product line to include flavorings such as vanilla, cherry, lemon; also soaps, lotions and perfumes for the ladies. 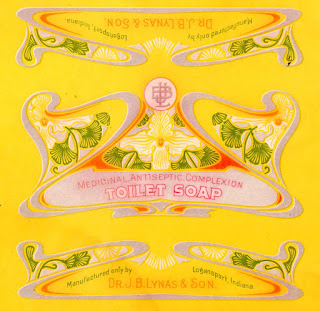 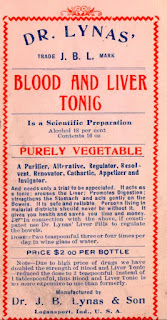 The Dr. J. B. Lynas & Son company, as it was later called had sales people all over the country, as mentioned. Advertisements were placed in newspapers stating: "You can own an independent business. From the Atlantic to the Pacific J. B. L. representatives are making money by selling the goods that please the people." Ads included the image of a horse and buggy  with "Why not get into business for yourself and make big profits instead of working for someone else?" and "Any man or woman equipped with one of these rigs is sure of a good monthly income by doing a little hustling."

By the late 1890s Dr. Lynas had 1400 to 1500 people working for the business all over the world. He had offices in Tokyo, Paris, London, New York, Philadelphia, Chicago, San Francisco and Atlanta. By 1900 his workforce had increased to 6 thousand selling his products.

GEORGE LYNAS AND THE APRON FACTORY ON THE THIRD FLOOR 1919:

George H. Lynas was associated with his father’s business assuming presidency of the company in 1901 after J. B.’s death. George was also president of the Kiddie Knead bread company (located in another building on Erie Avenue, behind the big JBL building). 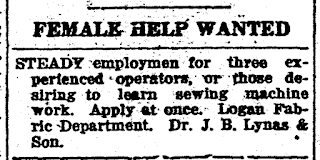 On the third floor of the Market street building was  a complete little factory which, no doubt, was unknown to over 99 per cent of the people of Logansport. This factory produced aprons and it grew from a very small beginning to the point where it occupied floor space 64x34 feet in dimension. At first only one or two women worked there. More employees were added. The aprons made in the Lynas factory were sold through the same agency that handled all other products of the Lynas establishment.

Modern machinery was installed. The table on which the fabric cutter worked was located on the east side of the room and extended a distance of 54 feet. Next to this table there were shelves.


Running through the center of the room was a large ironing table. There were fourteen 10 straight head sewing machines in the factory. 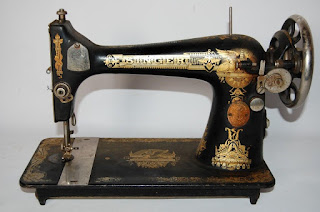 The room wasn't wired for electric lights because of the "great benefit of the natural lighting" and instead installed  skylights "which furnish an abundance of light".

On the north side of the large room one could look out over the city, in a nice, well-furnished little recreation space. A large piano was the central object in the space. On the floor there were rugs and scattered about were comfortable chairs "for the benefit of the workers of the factory, at the noon hour and during intermissions throughout the day".

On the south side of the large room occupied by the machines was a convenient dressing-room.

Miss Jennie Bryer, an experienced seamstress was placed in charge of the work in the Lynas apron factory.

Many years later labels for the J B Lynas products made in Logansport, Indiana could be found on the upper floor of the building.

Posted by Museum Director T Conrad at 1:25 PM No comments:

So, you get it that there is a museum in a beautiful Victorian house. Now, let's talk about history of the area. Let's begin with buildings that have been around for a while. This one is called the "Keystone" building. It's located on the northwest corner of 6th and E. Broadway, Logansport, Indiana. 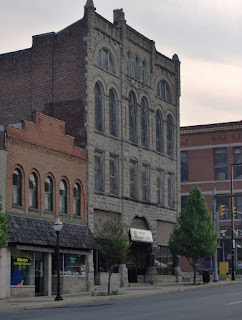 In 1897 a soft brick, dilapidated building was torn down in order to build this bigger, more sturdy 3-story building. Named the “keystone” building because Rufus Magee, the man who built it, had a huge key carved over the arch on the front door. His law office was located there 1899 to 1911.
It has housed Drug stores, a grocery store, the Logansport Tribune (1907-1911), Democratic Headquarters, Dick Sanburn Sporting Goods, and law offices –  upper story rooms over the years were used for a Dance Hall, John I. Shafer Hardwood Co. office and others. 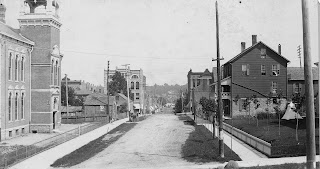 The building stands in the distance at left. Close left was the German Lutheran School.
Notice the dirt road which is 6th Street, looking north. The photographer was standing on E. Market Street, which was just called "Market" at that time. 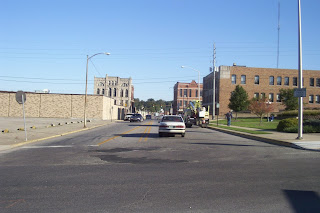 I took the photo above in 2011, 12 or 2013 - time gets away from me - this is how the area looks in 2015, however. At right in this photo is a pocket park, which is dedicated to the USA Military Veterans; beyond that stands the Logansport City government building, beyond that is a building for a future post! 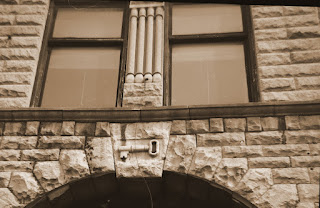 About 1968 someone photographed several buildings and subjects of architectural interest and someone else donated those photos to the Historical Society in about 2008.
Posted by Museum Director T Conrad at 1:59 PM No comments: