The McCaffrey building stands at the northeast corner of E. Broadway and 6th Streets. It is close to being 130 years old. The photo below was taken while occupied by Barton's business and office supplies. 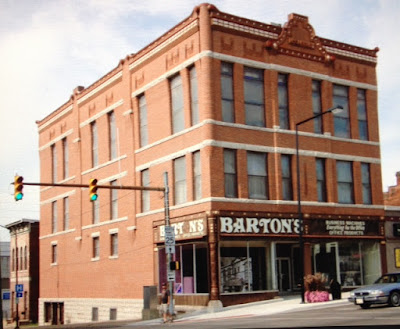 Michael McCaffrey was very successful in the wholesale - retail grocery business for many years.
﻿

March -15-1888 Logansport Pharos Tribune, page 4:
A force of workmen was engaged today in tearing down the old frame building near the corner of Broadway and Sixth streets. Mr. Michael McCaffrey owns the ground on which the buildings are located, and it is his intention to erect a brick business block on the same this year. 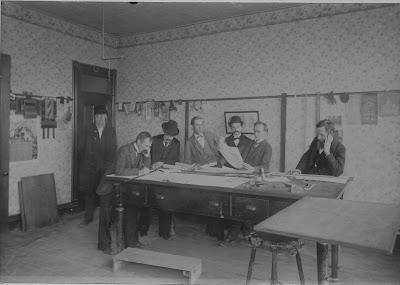 April 3, 1888 Logansport Pharos Tribune, page 4:
Crain & Krutch, the architects, are preparing plans for the building to be erected by Mr. Michael McCaffrey at the corner of Broadway and Sixth streets. It will be three stories high and an effort will be made to make it a convenient and attractive business block. 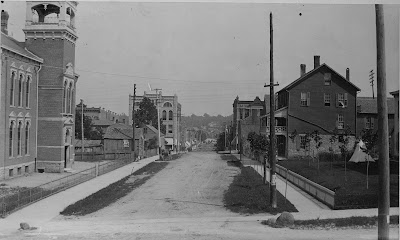 Above: Standing on E. Market, looking up (north) 6th Street,
the McCaffrey building can be seen in the distance at right.
﻿ 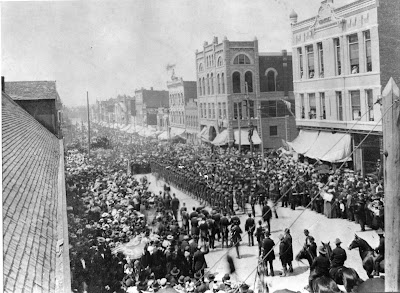 Above: Taken in 1899, looking west on E. Broadway - the
McCaffrey building is on the right side of photo.

McCaffrey’s original grocery store was located on E. Market. The numbering was different in those early days and E. Market was simply “Market” Street, so the address for that store was 92 Market. Later the number would be 410. 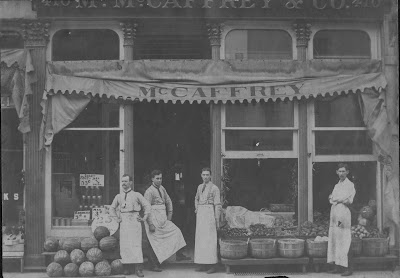 Above: Original store on Market. After Michael McCaffrey had the three-story brick building built at 600 (E.) Broadway he kept both stores going at full speed for a time.


Charles P. McCaffrey died of apoplexy sometime between Friday night and Saturday morning, and was found dead in bed by his sister Margaret at 6 o'clock when she went to call him to take the 7 o'clock train to Frankfort.

McCaffrey was the head of the firm of M. McCaffrey & Co., the wholesale and retail grocers, also in recent years engaged in the coal and wood business. The firm has two stores in this city, one at Sixth and Broadway, managed by the now oldest brother James McCaffrey, and the other at 410 Market Street. They also own a store at Frankfort, which is in the charge of John McCaffrey. The other brother, Anthony McCaffrey, is connected with the Market street store. Mr. McCaffrey was also president of the Farmers & Merchants State Bank. The grocery business will be continued by his surviving brothers
OTHER OCCUPANTS OF THE BUILDING OVER TIME
1919 -  Homer Closson –" The Paint Man"


July 2, 2006, Logansport Pharos Tribune, page 21
Known in the community as Barton's for (25) years will soon be known as Cardinal Office Products. New owners are Nancy and Michael Smith. Current employees will remain involved with the longtime retailer under new ownership. The store will continue selling office supplies. 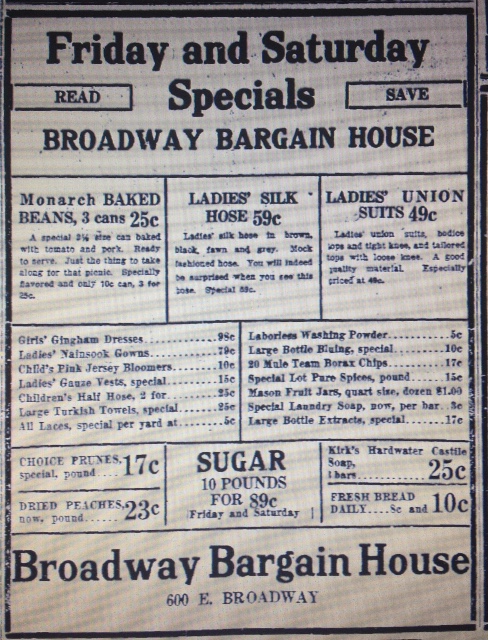 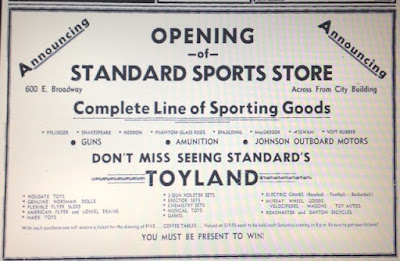 Above: 1950 Ad in Logansport Pharos Tribune
﻿
Posted by Museum Director T Conrad at 8:05 AM No comments:

It is big... and right now it is blue. It was built for "Moore & Carter Fireproof Garage" in 1913. This building stands at the southwest corner of 6th and E. Market Streets in Logansport. Erie Avenue runs, east and west, behind it. 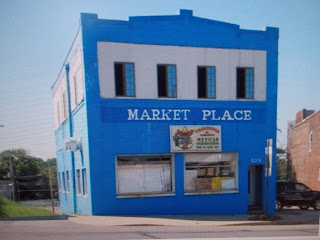 March 12, 1913, Logansport Pharos Tribune, page 12
RUSH WORK ON GARAGE
"Work on the new fireproof garage being erected on Sixth Street by Dr. J. V. Ireland is rapidly progressing and will be completed in a short time. The work of laying the cement, floor has already been started and is about half completed. When finished the garage will be one of the finest and largest in the city."


ABOUT THE OLD PHOTO

Notice the frame residence at the right of the garage. It stood there in the days of the Wabash and Erie Canal which flowed down what is now Erie Ave. The house was occupied at the time the photo was taken by a family named Sauers. Shortly after this photo was taken George C. Norris, a newcomer to Logansport, moved in. (Wabash & Erie Canal reached Logansport in 1838. What had been a waterway, then more of a muddy ditch and even later a dusty problem - was filled in with soil and made into a street by 1875.)

On the corner was yet another house, occupied during canal days by Dr. John Shultz. It was a two-story home. The front door-step was about level with the sidewalk, while at the back entrance, the kitchen door, was a full story lower. The house was empty, and greatly deteriorated, when it was finally removed.

MOORE & CARTER
In the early days of the automobile two machinists, Orpha Carter and Harry Moore who worked in the Pennsylvania RR shops (then called Panhandle) decided that the average owner would need a lot of skilled help lo keep the new toy operating, and that a good living could be made by supplying that skilled help.


So they quit their jobs with the railroad, formed a partnership under the firm name of Moore and Carter, and rented the abandoned Broadway Skating Rink. (The rink stood where the Logansport City Building is now.) Business was so good that in no time at all the hardwood floor, laid to provide a good surface for roller skating - and for dancing - became thoroughly oil-soaked…a fire hazard.

CARL FISHER AND THE NEW BUILDING
Among the new firm's regular customers was an Indianapolis man, his wife and a friend or two. That man, Carl Fisher, also made his living, and an exceedingly good one, out of the automobile business.

One of the many new problems brought to the front by the automobile was the matter of lighting for night driving.


An inventor devised a way to compress acetylene gas, which burns with a white smokeless flame in a cylinder, so that it could be transported safely, and it immediately became the universally adopted method of lighting for automobiles. Every car had its "Prest-o-Lite" tank mounted on the side of the car, with a line of small copper tubing lo carry the gas from the tank lo the two head-lights, and, frequently, to the smaller taillight, also, although oil lamps were still used for lighting the rear end.


Carl Fisher had acquired control of the patents covering this development and, with his Midas touch, had become a millionaire.


Fisher had acquired a summer home on Lake Michigan, at St. Joseph, Michigan, and made frequent trips between Indianapolis, home, of his Prest-o-lite plant, and that place of relaxation.


He usually stopped on the way at the Moore & Carter garage for gas and oil, for the big “Stoddard-Dayton” he drove. He and the local partners sometimes discussed the fire hazard and one day Fisher said “I’ll build you a fire proof garage.” 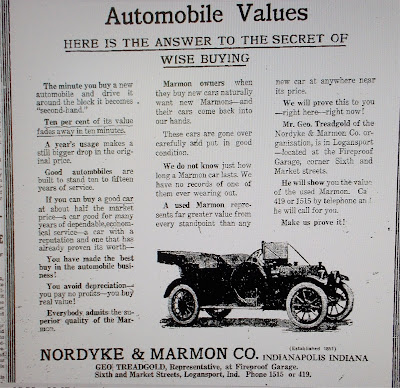 Above; An ad that ran in a Logansport newspaper.﻿


Posted by Museum Director T Conrad at 11:38 AM No comments:

Finding the location of the building in this photo was driving me crazy. This is the Henry Tucker building, which stood at 519 E. Market in Logansport, Indiana - not to be confused with the Tucker House, which stood "over on E. Broadway"; a story for another time. The Henry Tucker Building was torn down about 1906. 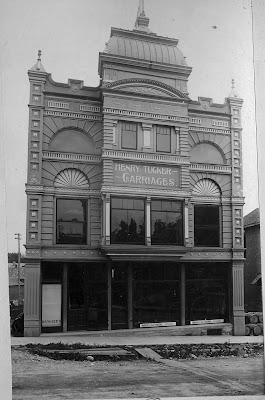 ﻿
The Lynas Building has occupied 519-523 E. Market since it's construction in 1912/13. Below is the Lynas Building, recognizable by the large J B L letters - for John B Lynas - along the top. 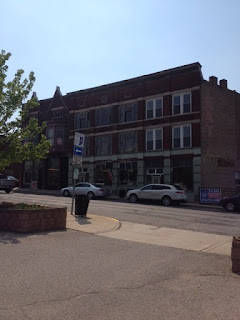 Having worked with the CCHS photo collection for about 15 years, the early photo looked familiar to me in that the slope of the street appeared to be the 500 block, south side of the street, at E. Market. My first thoughts were that the Tucker building was/is the building to the east (and butted up against to) the Lynas building. However - and this was most important - the building pictured above in black and white does not resemble the picture below, which was taken in recent years (these are still standing, by the way): 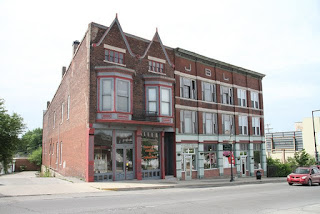 This bothered me so much. I couldn't understand why the old building would be torn down. It was beautiful. Although, many a beautiful, old building has been razed due to the preference of "modernization" and enlargement. And Dr. Lynas' business was, indeed, outgrowing its location at that time.

Henry Tucker served in the Civil War. In 1866 he returned to Logansport and started his carriage and wagon business, having bought out John W. Fuller. . I apologize that I haven't the date for when the building was built. In June of 1900 (Logansport Pharos Tribune 6-18-1900, page 8) Tucker sold his carriage, wagon & harness business to Thomas Meyer and became an Undertaker partner with a Mr. Woll. Henry Tucker died in Logansport May 27, 1922.

Logansport Journal July 29, 1900, page 3:
NOTICE OF CHANGE OF FIRM
Notice is hereby given that Henry Tucker heretofore conducting a carriage and harness business at, 519 and 521 Market street in the city of Logansport, Ind,, has sold said business to Thomas Meyer. The notes' and accounts of said Henry Tucker will remain in the hands of the undersigned Thomas Meyer for collection. All persons knowing themselves to be indebted to Henry Tucker please call and settle with the said Thomas Meyer as the old business must be closed up.
HENRY TUCKER.


Logansport Journal Jan. 22, 1903, page 6:
Vehicles of all kinds, and horse furnishings, are kept in complete stock, looking principally to the retail trade of the city and the surrounding country. A special feature about the harness handled by Mr. Meyer is the fact that it is all hand made. It is guaranteed.
Finally! An article to prove that I wasn't crazy...about this building location, anyway:
Logansport Pharos tribune, Dec. 26, 1906, page 5:

﻿
Posted by Museum Director T Conrad at 1:27 PM No comments: