Tipton Lodge No. 33 was the first secret order established in Logansport and Cass County, Indiana. General John Tipton, for whom the lodge was named, was the prime motivator in this enterprise. At the time was past grand master of Masons in the state of Indiana.


On June 28, 1828, when Logansport was only two years old, a dispensation was issued by the grand master, Elihu Stout, authorizing the formation of a lodge. There were twelve members and the meeting was held in an upper room of the Gillis McBean log tavern that stood on the southwest corner of 3rd and Market Streets.

The lodge met at different places until a brick building was constructed in 1837 on the northwest corner of 4th and North Streets.


FIRST LODGE BUILDING BUILT IN 1837
This building was dedicated in August of 1837 by General Tipton and his son, Spier (pronounced “Spear”) S. Tipton. This building was used until 1896, when it was replaced by the building which still stands today, in 2018. 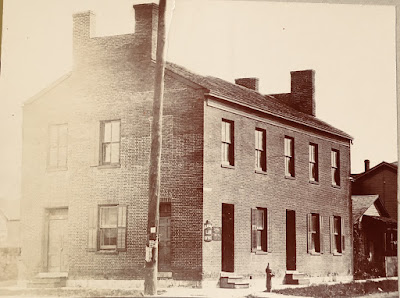 A NEWSPAPER ACCOUNT OF THE PROPOSED NEW MASONIC LODGE


The question, so long agitated, of erecting a Masonic temple on the Tipton lodge property, corner of North and Fourth streets, is now thought to be something more than talk.


The matter has been earnestly considered by the various Masonic bodies and it is now in the hands of a committee.


It is proposed to sell stock to member of Masonic bodies only and erect a four story brown stone building, 90 by 163 feet, fronting on North Street, at a cost of 340,000 to 360,000. It will be provided with an elevator and supplied with everything necessary to a first-class business and office building.


It is also stated that a leading business firm has agreed to lease the first and second floors, and no trouble will be experienced in letting all the office rooms on the third floor. The fourth floor will be arranged into lodge rooms for all of the Masonic bodies. If the plans are perfected, and the


Pharos feels confident that they will be, work will be begun in the spring.


It will be a grand improvement, and one that will meet the hearty endorsement of all interested in the prosperity of the city. 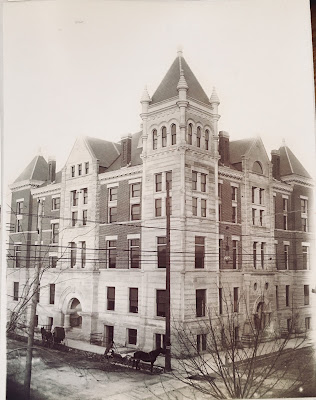 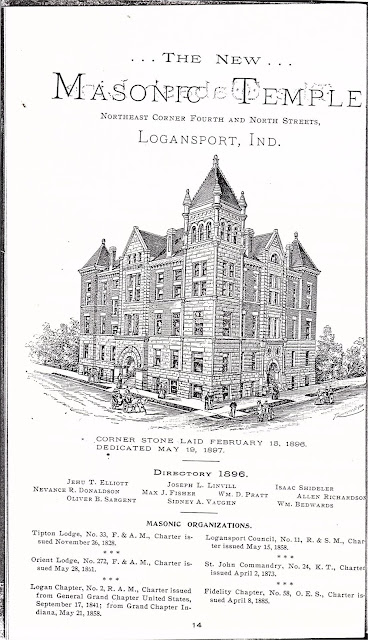 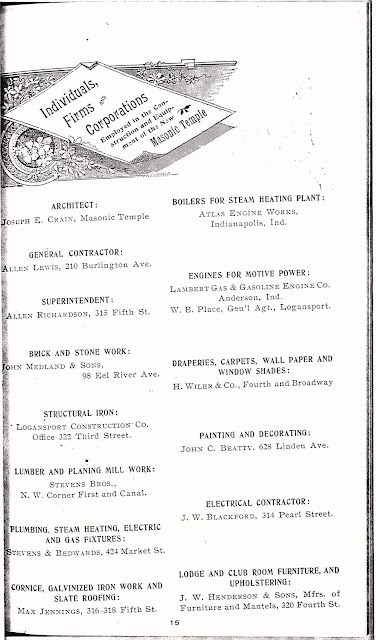 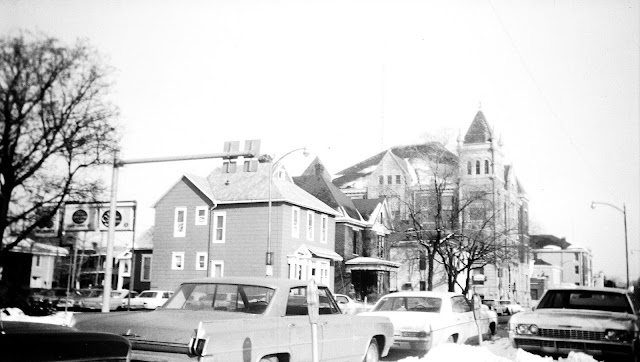 Before the new Cass County Jail was built North Street was a "through" street between 3rd and 4th Streets. The photo above shows the view standing on the northeast corner of 3rd and North, looking east toward the Masonic Lodge building in the late 1960s early 1970s. 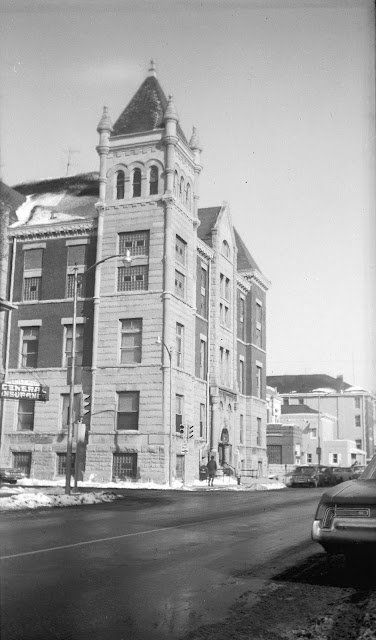 Above: This photo also shows when North Street went through between 3rd and 4th. Galen McVay Insurance stood on the corner, which is no longer a "corner". 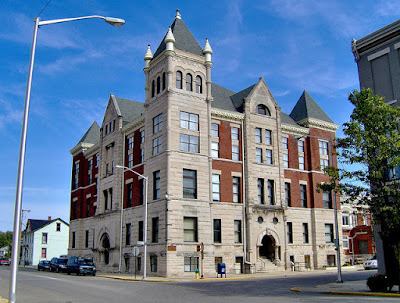 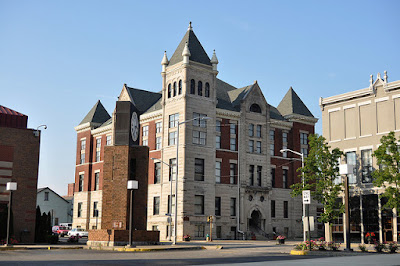 The photo above shows a portion of the "new jail" and the courthouse clock tower.

In 1999 the building was made into apartments.

Globes emblazoned with the names of Masonic lodges and the Order of the Eastern Star will still be on their old home front at Fourth and North streets even though the people inside the building will not belong to either organization.
That will be one of the first signs of the opening of Kechel Tower, the renovated Masonic Temple building, that will provide housing for clients of Four County Counseling Center.
On Thursday, the building will be dedicated to the late Dan Kechel, a pastor and substance abuse counselor who died of cancer in 1997.
The Masons, who agreed to a 12-year lease to utilize the third floor of the century-old limestone landmark, will retain use of the ceremonial area of the building.
Four County Executive Director Larry Ulrich says the ceremony marks the culmination, of a three-year effort to renovate the building into 23 apartments for Four County's independent and semi-independent living clients.
"Our clients are just absolutely thrilled," Ulrich says, "In fact our biggest problem now is that we have more people who want to live there than we have apartments available. Somebody is going to have to be told no."

The apartments in the basement and on the first and second floors are heated and air-conditioned.
Handicap access has been provided at the rear of the building, and the. $1 million renovation has been completed under budget, which should allow enough money for a new roof.
While the building's exterior has been renovated, Ulrich says there are certain areas of the structure that could not be completely renovated to look as the building did when it was built in 1894. Energy-efficient windows have replaced large wood sash frames, but many of the former window openings will not be replaced for structural, reasons.

The exterior will be power washed but not sandblasted, which could damage the surface.
New sidewalks and steps have been installed. Interior improvements have preserved many of the natural characteristics of the building, including four fireplaces.
While residents will not be able to use the fireplaces, much of the interior architecture has been preserved. Ulrich says the Masons have done their part to provide for the residents. They recently donated a pool table that will be recovered and used in a recreational common area. The apartments each have one bedroom, but the space in the apartments varies.

"It's not a group home," Ulrich says. "The people who will be living there are for the most part already living independently or semi-independently in other areas of the city." Ulrich says Four County has no current plans for developing the third floor once its lease with the Masons expires, but there is a buyout clause that could allow the area to be developed if a need arises before  the end of the agreement. Mike Meagher, executive director of the Area Five Agency on Aging and Community Services that facilitated the grant and tax credit process that funded the project, said the credit for the project does not belong to his agency.


"We are really happy. We were glad to be involved and it's good that Four County has found a use for the building. The clients of Four County and Four County win because they get a great place to live. The community wins because we saved a historic structure downtown. But the one thing I would like to do is praise the work of Phil Saunders. Without Phil, who was on the


Masonic Temple board, it never would have happened. I never saw anyone work so tirelessly to save a building. He worked for years to find a solution to that building problem."

Posted by Museum Director T Conrad at 11:20 AM 1 comment: