The Columbia Hotel stood next to the Panhandle Station (aka the Pennsylvania Depot at the southern end of 4th Street) the hotel address was 318 Canal Street, Logansport, Indiana. Canal Street later became Melbourne Avenue. 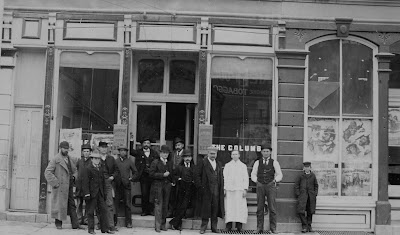 I researched this hotel after finding the photo above. I found the following clips:

Charles Nye has accepted a position in the sample room at the Columbia Hotel.
And…
A handsome street lamp was erected in front of the Columbia Hotel restaurant and dining hall.
-       Logansport Pharos Tribune, 1893 May 26, page 4

In 1896 Logansport Pharos Tribune reported that Arthur McTaggart was selling furniture and fixtures of the hotel Columbia.

1897 Logansport Times reported that Frank Beamer was now cooking at the Columbia hotel and lunch counter.

John Baker has improved and changed the interior of his bar room in the Columbia Hotel.
And…
Louie Wandrei who recently purchased the lunch counter and dining hall at the Columbia Hotel has rearranged and refurnished the same in splendid style. He now has one of the neatest places of the kind ever opened in Logansport.
-       Logansport Pharos Tribune, 1897 November 1, page 8

Fire reported Sept. 28, 1899 Logansport Pharos Tribune – Someone with murderous intent turned on two gas jets at the Columbia Hotel last night and but for the timely discovery by Mr. Wandrei a terrible explosion might have resulted. Suspicion rests upon a certain individual who had better make himself scarce. 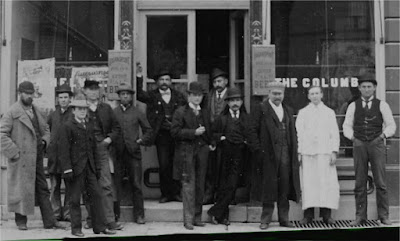 Posted by Museum Director T Conrad at 1:32 PM No comments: