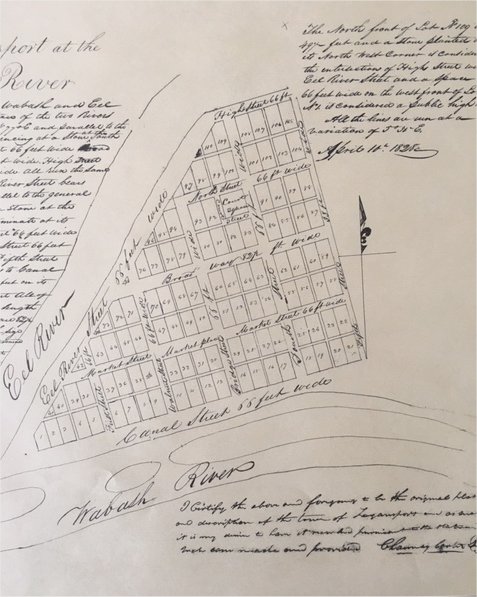 Logansport began as not much more than a great location between two rivers to trade with the native Americans. But, by 1828 it had grown into a town as one can see from the original plat above. This was the year that Cyrus Taber came to live in Logansport.

Biddle's Island is a "blob" drawn in the Wabash River.

In 1838 Logansport was incorporated as a city.

In 1853 Cyrus Taber and Allen Hamilton decided to offer a nice suburb on the south bank of the Wabash.
Taberville was platted July 11, 1853. 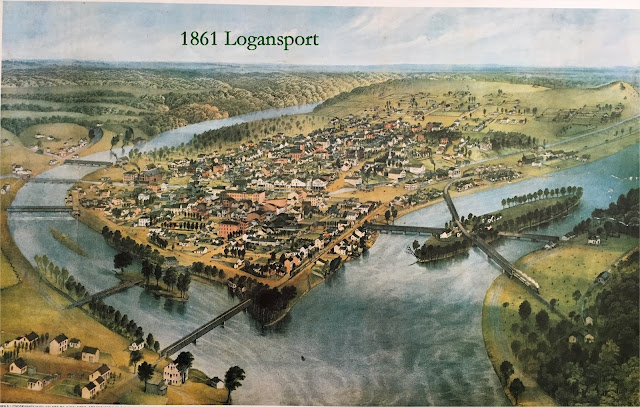 In this 1861 view of Logansport (hot air balloon map maker) - it is evident that Logansport was a pretty sizable city already. Biddle's Island is pictured here in the Wabash, complete with wagon bridges and railroad trestles. Also the Wabash & Erie Canal is the blue strip coming in at the top, right of the map - it flowed down what is now Erie Avenue then turned north on what is now Fifth Street, flowed up to the aqueduct to cross the Eel River, then on to what is now Water Street.

South of Biddle's Island a few houses of Taberville can be seen. (map above) 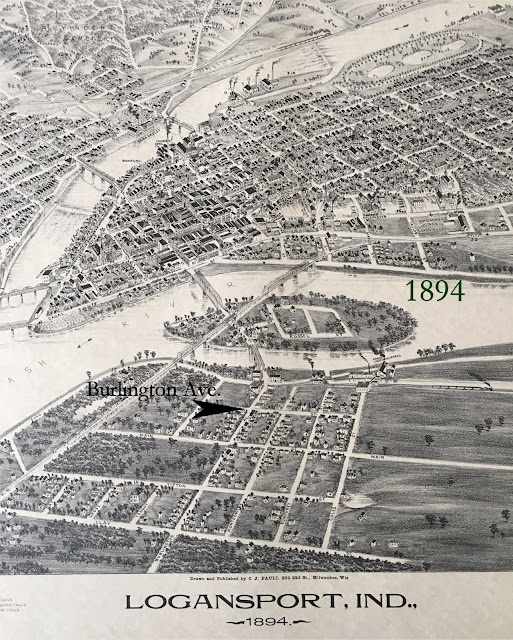 The 1894 map (above) shows Taberville. The name stuck for decades, but more or less simply a way of describing an area of town. People knew that if you were from Taberville that meant you lived on Logansport's south side. Later other neighborhood names would surface, such as "Shultztown"...but that story is for another time.

Humphrey Street, the second street east of Burlington Ave., was named for Humphrey Taber, son of Cyrus. Coles street was named in honor of Stephen Taber’s wife whose name was Deborah Coles. 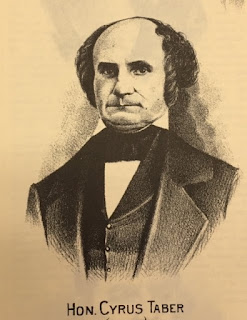 Cyrus (1800-1855)  and his brother Samuel came to Logansport from Fort Wayne in 1828. About a year later Samuel moved north to Plymouth, but Cyrus remained. Taber family members were present in Logansport until the last of them, Jesse Taber died in 1956.

All of the Tabers had one marked trait: they acquired land. At one time they owned a total of 16,300 acres from Logansport’s north, south, east and west.

Logansport Memorial Hospital stands on ground that, very early on, belonged to the Taber family. That property was known as Taber Grove; a wooded area which was used for picnics, 4th of July events. family gatherings and etc.
ALLEN HAMILTON 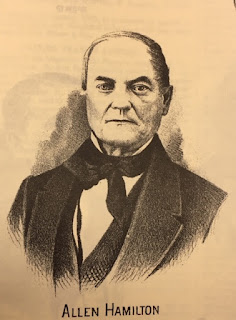 Montgomery Street was named after a son of Allen Hamilton.

The Cass County Historical Society sells copies of the maps used in this blog. Proceeds from any sales benefit the Society and its museum.

Posted by Museum Director T Conrad at 10:24 AM No comments: