Many, many of Logansport, Indiana's old homes were allowed to fall into disrepair. One was the home of Daniel D. Pratt at 915 E. Market Street. (Gone now.) For years this was a land mark not only for its architecture but because of an immense oak that stood in front of it. 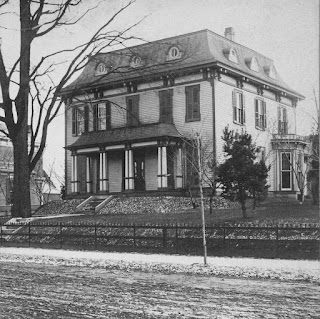 The house, a two-story frame with a mansard roof forming an attic, was built by Elijah Stevens, who came to Logansport from Mt. Vernon, Ohio. Mr. Stevens lived in the house for many years. In 1873 he sold the house to Pratt, then moved to Logansport's west side, on the corner of Brown and West Broadway. 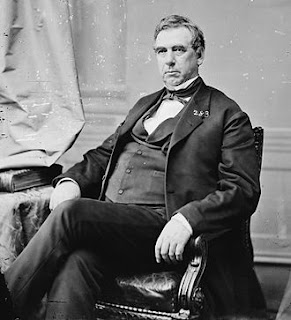 Senator Pratt's first wife was a Miss James from Rising Sun, IN. His second wife was Mrs. James Warren, whom he married in 1865. After Pratt died in 1877, she moved back to New York.
Pratt had two sons and one daughter. One son, Charles,  died young. James, the other son was killed at the battle in Hanover, VA in 1864, during the Civil War. The daughter, Julia, married an Englishman named E. S. Huntington. 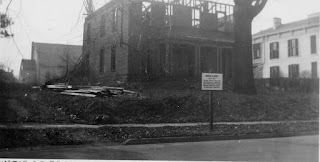 Above: Pratt home being torn down.
The house was vacant for a long time, then it was removed in the 1960s. The area is now occupied by the United States Post office of Logansport.
It makes this blogger very sad to look at the photos....﻿
Posted by Museum Director T Conrad at 2:02 PM No comments:

The Heppe building was the site for soap making in the 1800s. It later became well known, locally, as a place to haul your metal scrap or "junk".

Built in 1887-88, the building still stands today in 2015. The CCHS photo collection hasn't produced a nice, early view of the place but we did find one taken in 1984. In 1984 the building was needing attention. 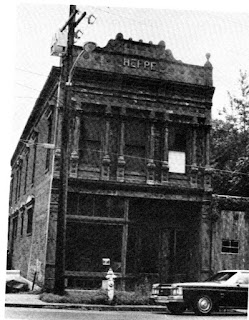 Logansport Times, August 27, 1887, page 5:
Heppe & Sons, the soap manufacturers, have let the contract for a warehouse and sales room on Erie avenue, opposite Wilson, Humphreys & Co. The building will be two stories and a basement , 23 x 90 feet.

The Soap Factory, owned and operated by William Heppe, made bar soap, soft soap, candles, & etc. He was successful in his business, especially with a brand that was popular with the locals - Royal. It was yellow laundry soap and every grocery in town carried it for sale. 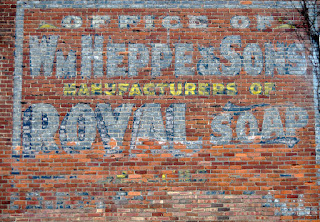 Logansport Pharos Tribune, May 11, 1888. Page 4:
Andy Heppe drove his soap wagon over a woman yesterday, while looking at a pretty girl on the sidewalk. The woman was not hurt, but her new spring head-gear was badly wrecked. She will sue for damages. 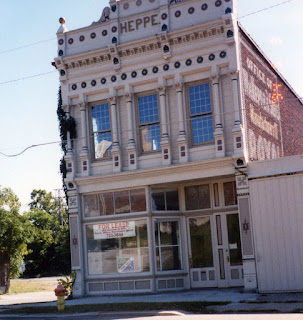 The building as it looks today.
By 1920s the business is listed in the Logansport city directory as dealing in “Hides and Junk”.
Logansport Pharos Tribune, December 7, 1938, page 13:
The Heppe fertilizer company of this city has received the carcass of "Victor," the 25-year old hippopotamus, which died a few days go at the Peru circus winter quarters from pneumonia. Skinner at the local fertilizer plant, the hide of this animal was found to weigh 540 pounds, the carcass being reported as weighing more than two and one-half tons. William Heppe of the local company is now scouting around for a market tor the hide. The remainder of the carcass went through the regular process of the fertilizer plant,
"Victor," billed as the veteran blood-sweating trouper, was purchased by the American circus company in 1918 and had been one of the chief attractions in the circus animal tent since that time. Ill for a few days the animal was found in its tank by a circus attendant. Loneliness, is said to have been a contributing cause for the death of the hippopotamus. 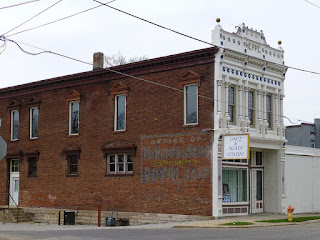 
No special celebration of their 62nd wedding anniversary is planned for Mr. and Mrs. William Heppe, of West Cliff drive, who will spend the day quietly at home.

The couple exchanged wedding vows October 4, 1887, in the home of the bride's parents. Mr. and Mrs. J. W. Lesh, which is now the site of the state hospital. His parents were Mr. and Mrs. Frederik William Heppe.

to work and Mrs. Heppe does her own housework.