He visited Logansport, Indiana to present a speech that was supposed to change the position of the presidency on national issues.

President Theodore Roosevelt found himself in a difficult position in 1902 when Iowa and the Midwest were challenging the Republican Party on their position with tariffs, monopolistic practices and isolationism. It was suggested that he make a tour of the Midwest - an eighteen-day trip with major speeches.

Logansport was to be the third whistle-stop. 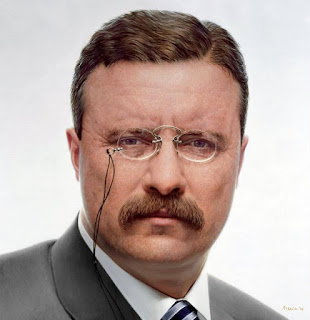 The Roosevelt entourage had been touring the eastern states. They had arrived in Pittsfield, Massachusetts for a speech on a beautiful September day. Teddy decided to take a carriage ride through the town. A carriage was prepared for Teddy and his secretary. An FBI agent was to drive the team of horses.

The carriage was driving beside a trolley track which ran through the center of the street. The trolleys had been ordered not to run hat morning.

Yet, as the carriage proceeded down the hill, they could hear a screeching noise behind them. A trolley came wildly down the hill and slammed into the carriage. The president and his secretary were thrown onto the grass at the side of the street. The FBI agent was crushed to death by the wheels of the streetcar. Teddy’s face was
bloodied and his leg injured, but he was able to get up and continue his planned trip. If the trolley had hit the carriage two inches further to the right the president and his secretary would also have been crushed to death.
The driver of the trolley was sent to jail for six months. 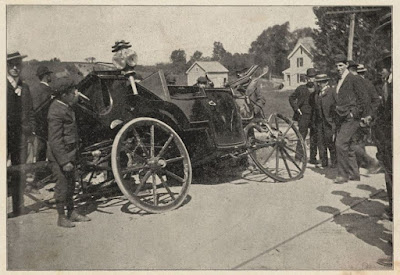 The president was able to make his speaking engagements for the next few days, shaking hands with as many as fifty-two people per minute for three hours at a time. But, his leg was beginning to cause him great pain. 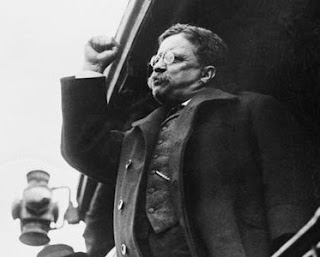 The train left New York on September 20. He arrived in Cincinnati for his first major address. He managed to make his speech but standing was becoming difficult. The president went to bed immediately upon arriving in Detroit and complained that his leg was throbbing with pain.

Meanwhile, Logansport had prepared for President Roosevelt’s major address by erecting a large platform at the corner of Seventh and Broadway in front of the High School (later named the Roosevelt Building). 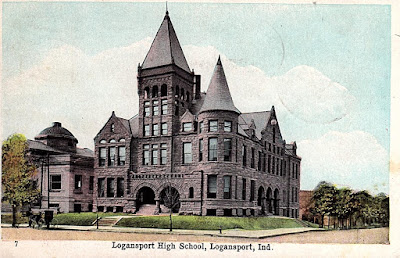 The Roosevelt building on the corner of 7th and E. Broadway (razed).

The train arrived on schedule during a pouring rain. The Elks Band was waiting to lead the procession. Carriages for all of the dignitaries were lined up. The parade moved up Market Street to Ninth Street. 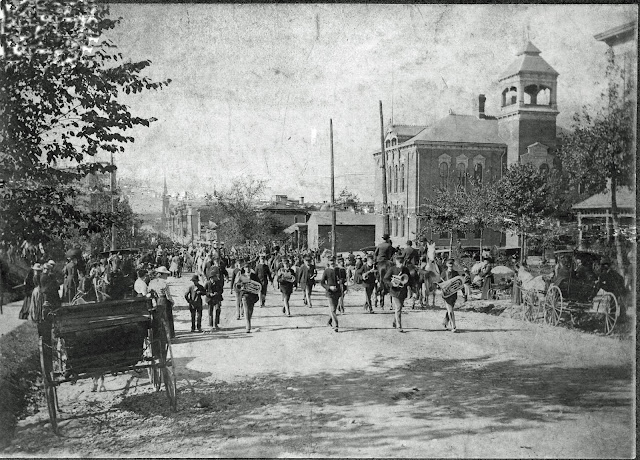 Above: The Elks Band of the time, pictures here marching on another day, on E. Market at 6th Street.

Henry Wiler had decorated the skating rink, as an alternate (dry) place for the president to speak. This is where the city government building stands today. But President Roosevelt insisted that he could speak in the rain.

Cheers rose from the more that 5000 people waiting to hear the speech. Teddy looked out across the sea of
umbrellas and announced that he could speak in the rain if the crowd could put their umbrellas down and
listen to him. The umbrellas all came down and Teddy presented his twenty-seven minute major address
to the issues that were troubling his administration.
Every available policeman of the community was visible surrounding the stage and watching the crowd.

Immediately after the speech, President Roosevelt was assisted down from the stage and down into the street He was having great difficulty walking. 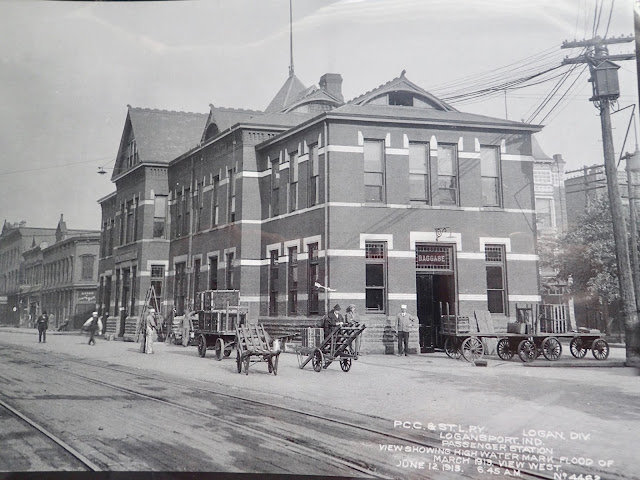 Above: The Pennsylvania Depot built 1882 - razed 1962. Telegrams sent from here to notify Indianapolis surgeons to be prepared for President Roosevelt's arrival.

Telegrams were sent from the Pennsylvania Station to the Columbia Club on the Circle in Indianapolis that the
president was ill.

Four surgeons were waiting and checked the president before he attended a reception for the Indianapolis crowd. He made a few comments to the large crowd and was hurried out to a carriage that rushed him to St. Vincent’s Hospital.

The president refused to have an anesthetic for the operation on his infected leg.

It has been said that Roosevelt didn’t feel that his Vice-president, John Hay, was physically strong enough to carry out the job of president if he, Roosevelt, should die during the operation.

The doctors had to open the large swollen area and drain the collected fluids. He was carried out of the hospital on a stretcher and placed on the Presidential Train for Washington.

The rest of his trip was cancelled. He had a further operation that actually opened the infected area and had the bone scraped to remove the infection.
Posted by Museum Director T Conrad at 1:09 PM 1 comment:

A PLACE OF AMUSEMENT & RELAXATION WITH A BOAT TO FERRY VISITORS.

It was similar to what we consider a "vacation spot" or "weekend getaway" today.

This is the island which occupies a space in the middle of the Wabash River – east of the 18th Street Bridge in Logansport, Indiana. It was named for Frank Kienly, who purchased the island in 1905. 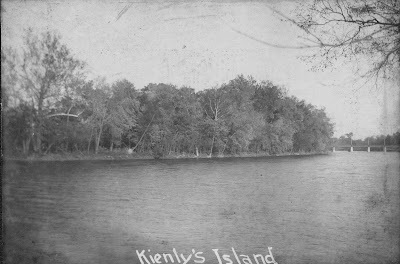 THE MAN AND HIS FAMILY

Frank G. Kienly, pictured,  was born in LaPorte, Indiana in 1869 and came to Logansport around 1890. On November 23, 1898 he married Mary M. Gleitz. The couple had one son and two daughters: Francis, Florence and Alice.

Frank owned a service station on W. Market and Front Streets in Logansport and a saloon on W. Market near the bridge. He also worked at the wine importing company of Kreuzberger in a four-story building that stood on the SW corner of 3rd and E. Market in those days. 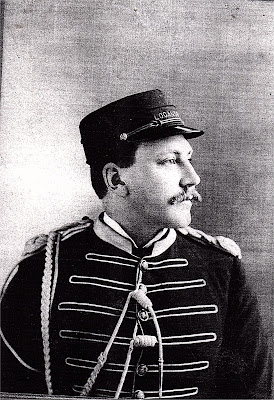 Above: Frank in his band uniform 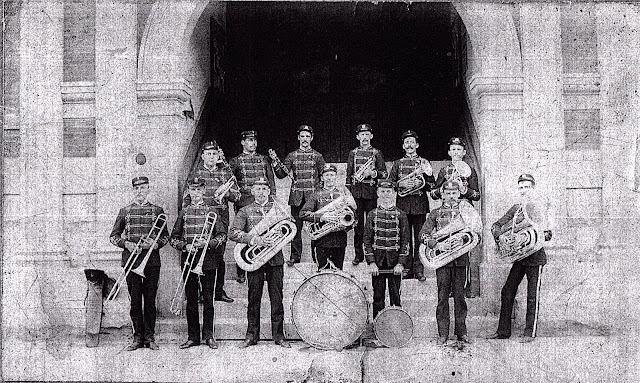 Logansport matured from an Indian trading post center and railroading town to a cosmopolitan area with culture, opera, art, formal parties with dancing and political gatherings.

Frank Kienly dreamed of a summer place where a family could escape from the hustle and bustle to spend an entire weekend enjoying nature, relaxing and picnicking.

He purchased the island in 1905 with the idea to have a park with a beer garden, but he decided against any kind of liquor sales. Instead he discussed plans for a bath house, making the island a “bathing resort”. 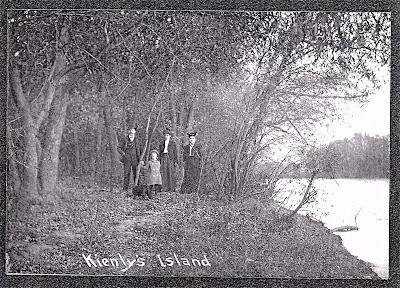 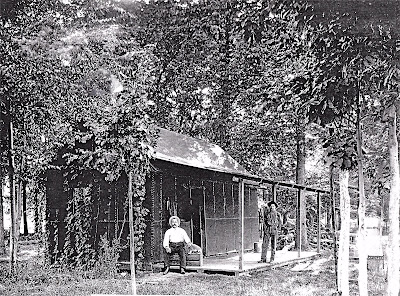 Frank, in white shirt, and Charles A. Smith, standing near a cabin on the island.

By 1910 “a few” summer cottages had been built on the island to meet a demand by a very interested public. 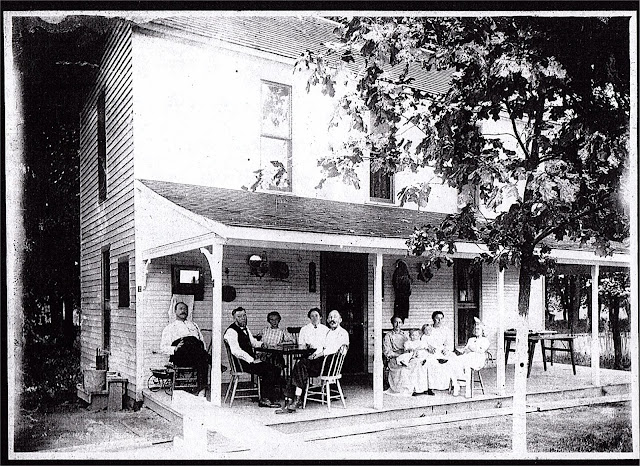 Above: Far left is Frank. Far right - Mary M. Kienly holding Francis G. Kienly, Emma Wolf holding Alice Kienly, Florence Kienly sitting on chair. This was taken on the island. The identity of the people around the table are unknown.

In 1908 local newspapers announced that Kienly was building a big motor boat. The “Coletta”, as the boat was named, would transport visitors across from the river bank. People could take the interurban street cars to the junction just east of the island and be ferried over. During the island days he was affectionately referred to as “Admiral” Kienly. Even before the island days he was known for boating both the Wabash and the Eel Rivers, and mentioned in the local newspapers for boating as early as 1898. 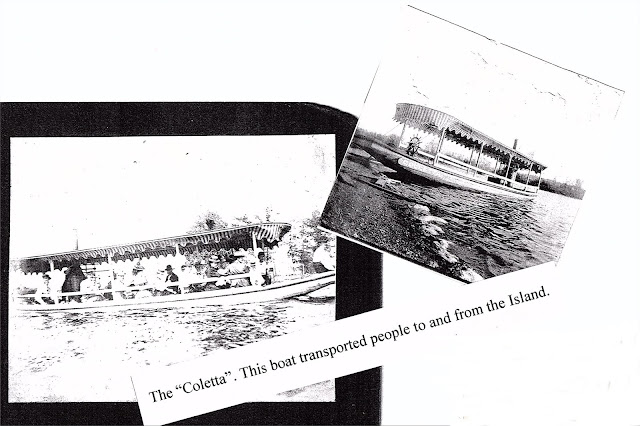 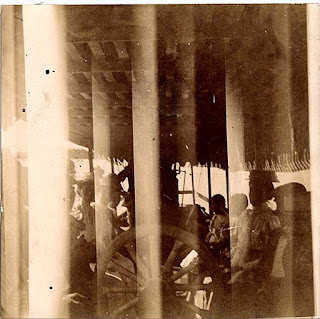 Above is a rather poor photo, but it is an actual photo taken on the Coletta early 1900s. 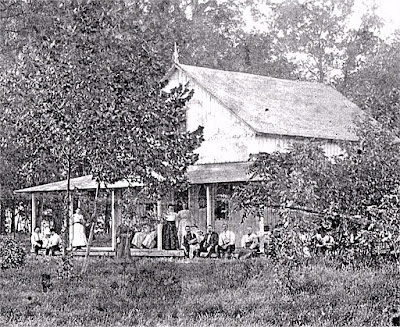 Kienly house on the island 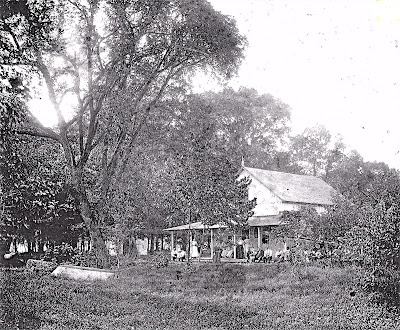 Same photo as above - not cropped 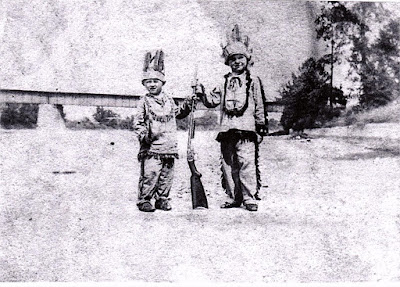 A couple of boys having fun on the island.

Frank Kienly served on the selective service board in 1940, when it was formed. He was a member of St. Joseph Catholic Church, the Knights of Columbus, the Notre Dame Retreat Club and an active member of the L’Anguille Valley Memorial Association as well as the Elks. He was also secretary of the St. Vincent Cemetery Association for many years. He died of a sudden heart attack in 1945. 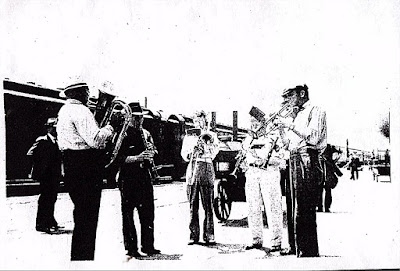 At left - Frank plays tuba with some band members at the Pennsylvania depot, Logansport.

At some point after Kienly's death the island came to belong to Charles Smith and family. Judge Leland Smith willed the property to his son, who owns the island at the time of this blogging update. I am told no one visits the island these days unless the son, who lives out of the area, happens to come to Logansport.

Posted by Museum Director T Conrad at 2:18 PM No comments: