Jerome Brooks, 23, and Charles Carr, 22,  were known in this area for making trouble.

They were tired for the murder of Asher W. Slater.
On the night of April 20, 1871 one man kept Slater, a shop keeper in downtown Logansport, occupied with an order of a bucket of molasses, while the other came up behind him and beat Slater over the head and robbed him of $140 from his pocket and about $15 from his cash drawer. Slater died from the head wound, loss of blood, and concussion of his brain. 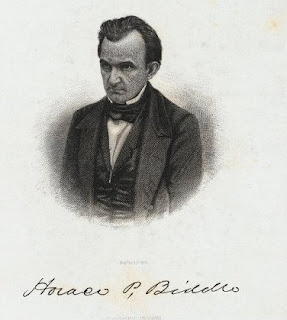 Jerome Brooks confessed to the murder. 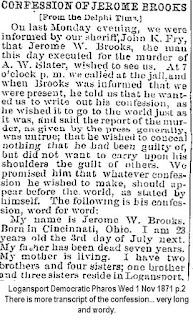 Full confession can be found in the Democratic Pharos, November 1, 1871, page 2.

He was executed in Delphi, Carroll County, Indian. A large crowd had gathered to witness the hanging, but were disappointed, because under the law all public executions were prohibited.

The Sheriff and a number of peace officers were detailed for this duty.

Brooks was interviewed by several people up to the time of being led to the gallows. He spoke to all in an indifferent manner. He did not seem to realize his awful fate and showed the same levity of manner from his arrest up to time for the execution.

He was taken in a closed carriage from the jail to a gallows erected in the courthouse yard, which was enclosed with a frame structure and a roof. 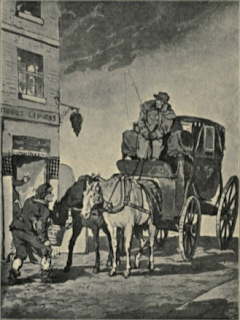 He mounted the steps with no sign of fear other than heavy breathing. He placed the noose around his own neck. When asked if he had any last words he said. “No. I’m ready. Blood should be on no man’s head.” He bid each person a formal farewell. The Sheriff read the death warrant. When asked again if he had anything to say, Brooks said, “I shall never forget Bringhurst.” (His defense attorney.) After death the body was cut down and taken to Logansport for burial in Mt. Hope cemetery.

Posted by Museum Director T Conrad at 8:48 AM No comments: