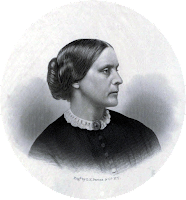 This is Susan B. Anthony circa 1855. I have no doubt, dear reader, that you know about her and I'm not even going to try to rehash what has been printed and posted by many more, way-better-qualified people than myself. Rather...I wish to share info and acknowledge some Cass County women who involved with this movement. Namely, Lois Wilson, Dora Smith, Sage Velle Fenton, and Anna Dunn Noland. 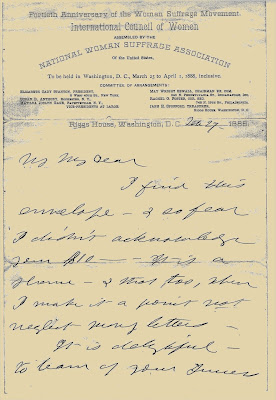 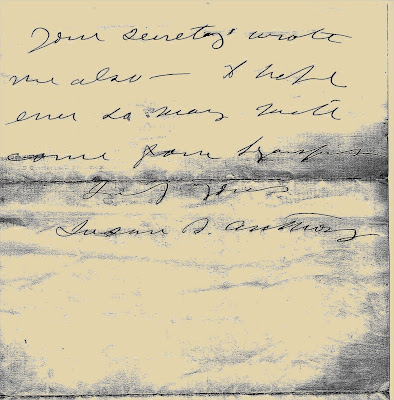 This letter, written by Susan B. Anthony and addressed to  Lois Wilson, Logansport , is among the Cass County Historical Soc.'s collection. 1888. For years the museum Curator had been under the impression that Lois Wilson was married to a local attorney. Wrong. Her husband was Harvey J. Wilson, Truant Officer and they lived at 416 Eighth Street, Logansport. 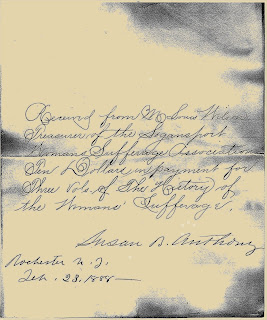 Research tells us that this local group of suffragettes was small at the time of this letter, 1888, and the group sort of dissolved until 1908, when there were many more local women ready to speak out, march, and generally make some noise for the right for women to vote! 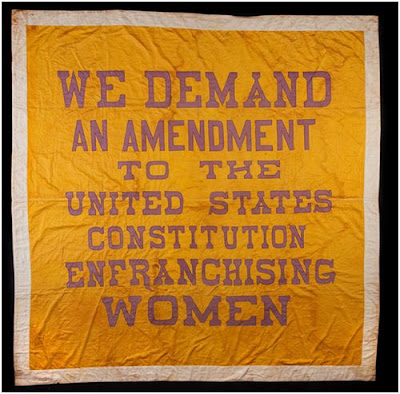 On December 7, 1908 a meeting was held in Logansport, Indiana. This meeting was organized and promoted by Dora (Mrs. Oliver P.) Smith, of 409 North Street. Her husband was a cigar maker and I can't help but picture him and "the boys" sitting around a table in the back of the cigar store talking about the little women and their little cause. Cute - aren't they? having meetings and imagining what politics is all about...just so long as they get home in time to make dinner and clean up the kitchen afterward. 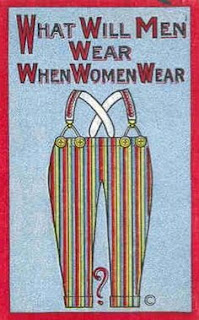 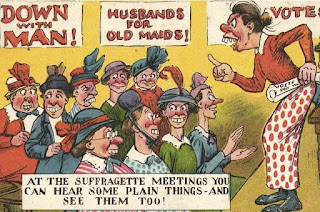 Mrs. Anna Dunn Noland, Logansport, was the state president but was out of town and unable to attend. But, Miss Peppinger, San Antonio, Texas, national secretary of the Women's Suffrage society was in attendance.
By the way - I had to dig around for most of the ladies' first names. Everyone was Mrs. "Husband's First Name" in those days. In the case of Miss Peppinger - I had no luck finding her first name.

Here is a news clipping of that meeting: Logansport Daily Reporter, page 1

The bottom line reads "Of course some people will call us hair-pullers, and laugh at us,"..."but we will stay in the race until we win." quoting Dora Smith.
In 1913 the Women Suffrage movement was converging on Washington DC. 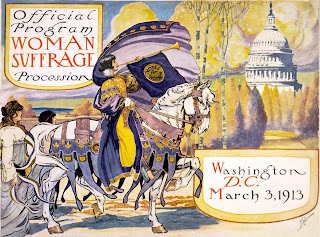 Meanwhile, here at home the Logansport Journal Tribune was interviewing for opinions about the new "slit skirt".
Concerning slit skirts, 1913.
Mrs. Anna Noland, suffragist leader in Logansport and one whose views are generally broad and unbiased, expresses her opinion: “I can see nothing wrong about the slit skirt. I think all the evil lies in the mind of the beholder. One must admit there are some people who have always been able to make evil out of the most innocent things. I think the skirts are very comfortable. To me they serve the same purpose as the short skirt: comfort and convenience. I do not like the tight skirt simply because it is an affection since it hinders a woman’s moving about.” When asked if her opinion was the same for all slit skirts she said, “No, I do not like a few of the slit skirts, but they were very extreme and therefore immodest. They are calculated merely for attention.”

Mrs. Isaac N. Crawford’s opinion: “No, I do not like the slit skirt and I think that every woman who appears in a slit skirt should be placed in jail. They are immoral. They invite disrespect and even insults from men.”
NOTE: Mrs. Crawford's husband owned a large farming implement and hardware store in the downtown. 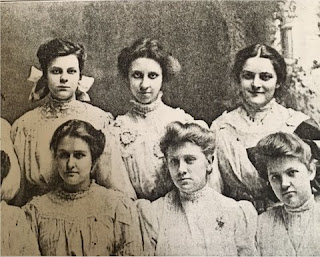 Above: That young lady in the center, in the back row, was Sage Velle Fenton. 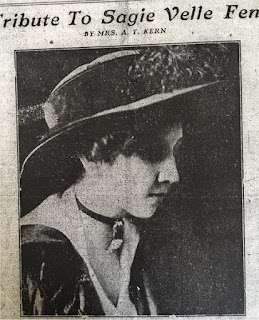 
Anna Dunn Noland Dies At Home of Her Sister


Anna Dunn Noland, champion of woman's suffrage and state president of the Equal Suffrage association for 13 years, died Friday morning at the home of her sister, Mrs. Sarah, Noland in Kouts, Ind. She was 71 years old. Mrs. Noland widow of the late Dr. James Noland; and a native of this city was removed from her home a half mile north of here on the Michigan road to the home of her sister last Saturday. Her condition was serious then. About two weeks before Christmas Mrs. Noland was found unconscious on the floor in the kitchen of her home, by neighbors who came to call. She had been bedfast since. Her condition responded to treatment and she grew better for a, time, only to suffer a relapse that resulted in death. Mrs. Noland was born in Logansport the daughter, of Mr. and Mrs. M. H. Dunn and spent her early girlhood here later moving with her parents to Star City where her father engaged in the grain elevator and lumber business.


Following her marriage to Dr. Noland they moved to North Judson in 1883. About 1890 Dr. Noland transferred his field of endeavor to Logansport and an active Mrs. Noland became a worker in the ranks of the Woman's Christian Temperance Union. At this time Mrs. Noland manifested a deep and burning interest in the equal suffrage movement and in 1910 was elected vice-president of the state association at a convention in Kokomo. Within a short time she became president and was re-elected to the illustrious-office 12 times. During her terms of leadership of the Equal Suffrage association Mrs. Noland campaigned the state in the interest of her work and cultivated a wide circle of friends in every walk of life by her earnestness, zeal, personality and tireless energy. Finally she saw the object of the association accomplished in the adoption of a constitutional amendment and subsequently retired from active work.

Posted by Museum Director T Conrad at 11:09 AM No comments: