FROM TAILOR TO GROCER TO TAVERN

Casper Granby was a tailor. He married a young lady named Margaret J. Fisher in Cass County, Indiana in March of 1887. She was his second wife. His first wife and six children lived in Three Rivers, Michigan. The couple opened a shop at 525 Twelfth Street, Logansport, Indiana and Casper began his own tailoring business. His shop is listed in the 1887 Logansport City Directory under “Merchant Tailors” and he and his wife lived in an apartment above the shop. The couple had one daughter together.


Casper got into the grocery business by 1895. We’ll never know what made him change his line of work, possibly job security, as everyone has to eat, but not everyone could afford new suits. His new found occupation didn’t last long, however. Casper died in May of 1897 while visiting his children in Three Rivers. He was buried in Burr Oak, Michigan alongside his first wife.

Margaret Gamby maintained the grocery at 525 Twelfth until about 1914. By 1915 William and Fannie Hildebran were operating the grocery. 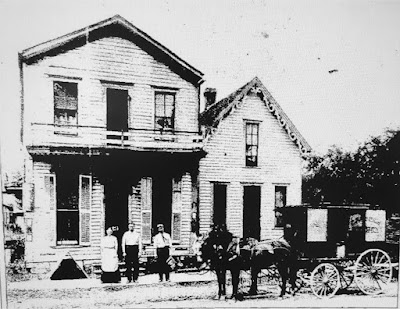 The Hildebrans pose for a photograph in front of their grocery about 1914.
The owner of this original photo is Dorothy Dunkin Vernon, a great great granddaughter.

Five years later, in 1920, the grocery had become just one of the locations for the J. T. Ruch & Co. “chain” of stores in Logansport. Rich was in business with one of the men in the Drompp family, whose name we haven’t located, yet. The manager of Ruch’s 12th Street location, Virgil Morgan, resigned in January of 1922 to take a position with a “five and dime” store in Marshall, Michigan.

By 1924 the property at 525 12th Street was cleared of its groceries and was renamed “Ruch and Drompp Thrift Store”. They did business until 1928, and then the building sat vacant for a year. 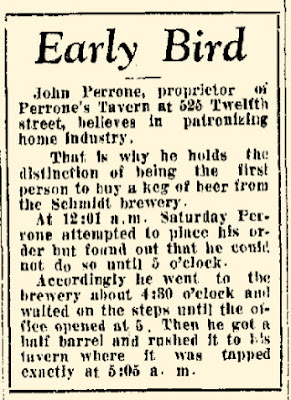 Between 1931 and 1935 John Perrone operated “Perrone’s Tavern” opened here. An article in an issue of the Logansport paper announced that John Perrone, who believed in buying local and was known as an “early bird” waited around for Schmidt Brewery to open and purchased the first keg of beer from them. (Logansport Pharos Tribune, March 31, 1934)

Due to gaps in the city directories and other documentation and materials available for research, there is no definite year for when the property was reoccupied. When it was reoccupied it was by Walter Purcell. Walter Purcell started up a nice tavern and restaurant and did business there until he moved in 1939. At that time Mr. Purcell moved his operation to a new building, built by Wolfe Construction, at the west end of Linden Avenue. He ran a nice ad in the Logansport newspapers and from all indications he did very well at that new location.

Above: Logansport Press, September 1, 1939
Meanwhile the property at 525 12th Street was getting a new tenant, Joseph Ricciardi, and a new name – The Brass Rail. The Brass Rail offered authentic, homemade Italian food. It was well received and did a good business for many years. Dinner specials were often advertised in the local newspapers, boasting of the best spaghetti and meatballs and clean tablecloths on the tables.

The Brass Rail changed owners in the early 1950s when Nicholas Mittica took over. His residence was listed in the Logansport City Directory as “525 ½” which placed him living in the second floor apartment, as the original couple Casper and Margaret Gamby’s, had done before him. 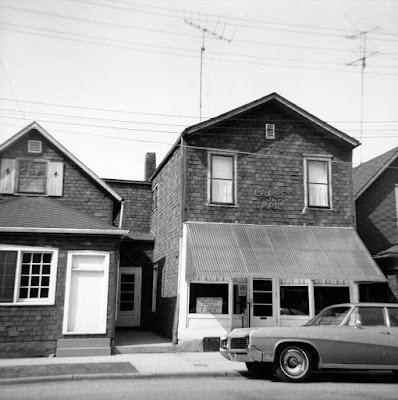 Later photo of The Brass Rail

In 1970 Nicholas Mittica was arrested for serving alcohol to six minors. The juveniles, one age 16 and 5 age 17 were arrested for illegal possession. Two of them were from Logansport and four were from Monticello.

The business seemed to diminish from that time on. 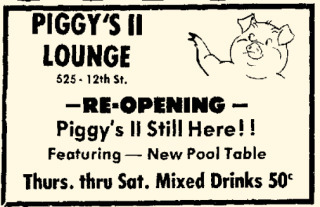 The Brass Rail name was lost in 1981 when a new owner came to town. His vision for the place focused more on drinks and entertainment and less on food service. He put in a pool table, played loud music and renamed the place “Piggy’s”. After a short shut down, this owner reopened as “Piggy’s II Lounge”. But by 1984 the business was closed.

In 1984 Mary Ricci opened a ceramic shop at the address.
Posted by Museum Director T Conrad at 12:45 PM 2 comments: