Information, that piece of the puzzle that we search for and cannot seem to find always seems to turn up on its own if a historian waits long enough. As in the case of one Thomas S. Dunn. Thomas B. Helm’s 1886 "History Of Cass County Indiana" contains Dunn’s name.

We know Dunn was a soldier from info in Cass County Historical Society's files. We know he fought in the Mexican War under Spier (pronounced Spear) Spencer Tipton. And we also know that he actively recruited soldiers for a three month tour of duty to serve in the Civil War, along side Capt. Dudley Chase, here in Cass County. It was after that war that we—we meaning “the CCHS files” lose track of the man.

Recently a break through to obtain the rest of the story popped up in an e mail to the Cass County Historical Society Director.

T. S. Dunn was born in September of 1822 into a prominent Hanover, Indiana family. He attended Hanover College. At some point he came to Cass County, Indiana where he signed on to served as a private in the Mexican War. (Helm history pages 331-334) When the Civil War began, Dunn and Capt. Dudley Chase organized a company, which became part of the 9th Indiana Infantry Regiment. On April 24, 1861, he was promoted to the rank of captain. In July of 1861, Dunn was mustered out and became a captain in the 12th US Infantry. Later he served with the 21st US Infantry. At the Battle of the Wilderness, Dunn received breveted to ranks of major and lieutenant colonel for "gallant & meritorious" service. After the war Dunn remained in the regular Army.

In February 1873 he was promoted to major, while serving with the 8th US Infantry. Later Dunn was stationed in Oregon, Wyoming and Arizona, including Tucson and Ft Yuma.

Dunn was the commander of Ft. Yuma in 1877 at the time of construction of a railroad bridge across the Colorado River at Yuma.This was a controversial project with the Southern Pacific Railroad Company facing off against the U.S. Army. 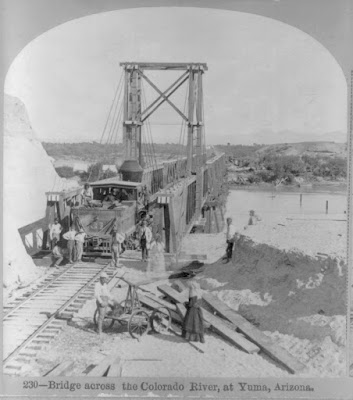 During the last 16 years of his life, Dunn resided in Santa Monica, California with two daughters. He died 11-13-1895 at his residence following an appendectomy surgery. His brother, Williamson McKee Dunn, served as a congressman and later the Judge Advocate General of the Army.

Mexican War, May 11, 1846, President of US by proclamation announced that a state of war existed between this country and Mexico. The news reached Logansport without delay and Capt. Spier S. Tipton immediately began enlisting volunteers including T. S. Dunn, (a private) The group headed to Indianapolis, then on to New Albany, the rendezvous place for the Indiana soldiers.

Civil War, (President proclamation April 15, 1861) Capt. D. H. Chase of the Zouave Guards whose military fervor had long before induced him to organize a company of boys which he armed and uniformed at his own expense and drilled them until they were disciplined, was the first (in Logansport/Cass Co., IN) to tender the services of his company. Together with Capt. Thomas S. Dunn he opened a recruiting office at Market and Fourth Streets. By April 17th the pair had enrolled 125 men. Good work for less than 3 days. Capt. Dunn’s company left Logansport on the 22nd of April and was accepted by the proper authorities at Indianapolis the following day.

At three months end ( that was the amount of time required at the time of enlistment —a service of three months) Capt. Thomas S. Dunn and his men returned to Logansport to a huge welcome home celebration. “After breakfast, A. M. Flory. esq., in behalf of Company D, presented Capt. T. S. Dunn with a handsome sword, as a testimonial of their regard for him.” – History of Cass County, Indiana by Thomas B. Helm 1886.
Recruiting continued steadily at the quarters of Capt. T. S. Dunn, who used every exertion to fill up his company as fast as possible. These recruits were for service in the Twelfth United States Infantry.
Thomas Searle Dunn is buried in Woodlawn Cemetery, Santa Monica, Los Angeles County California, next to his son, Lt . John Tipton Dunn.
Posted by Museum Director T Conrad at 12:04 PM No comments: