On July 1, 1922 four-hundred-thousand (400,000) members of six Shopcraft Unions walked off the job at 10:00 a.m. shutting down construction, maintenance and repair on rolling stock on virtually every major railroad in the country.

Having 12,200 miles of tracks and employing 55,000 shop-men, the Pennsylvania Railroad was the largest railroad company. By July 2nd, twelve thousand (12,000) deputies and U.S. Marshals had been appointed and the National Guard troops were on duty in 7 states. 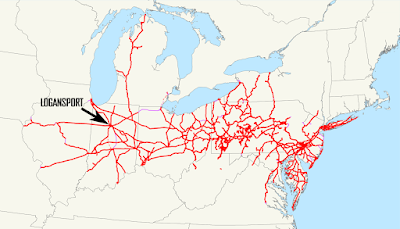 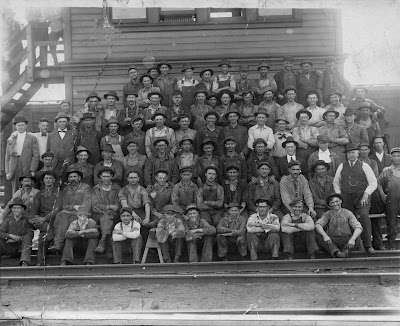 A group of Logansport Panhandle Shop workers pose for a photo.

The powerful Federal Labor Relations Board was mostly backing the strikers and the Pennsylvania Railroad executives refused to recognize the Labor Relation Board. Logansport attorney Albert Jenkines represented the employees of the Federated Crafts Shop Union in Logansport during the strike. The local shops employed 1221 and were part of the Pennsylvania Railroad system. 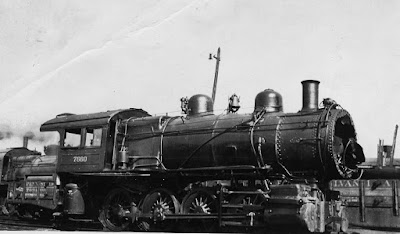 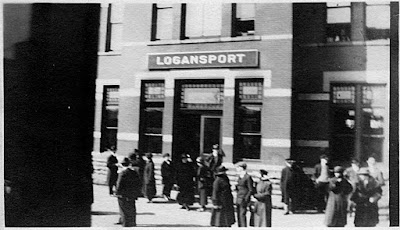 Passengers and others wait outside Pennsylvania Depot, before the strike in 1922. 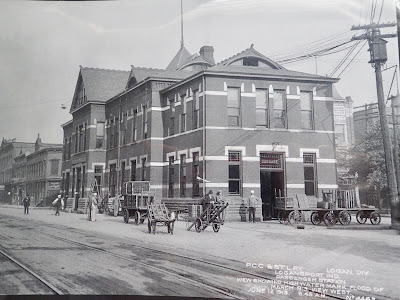 Penn Station aka Pennsylvania Depot circa 1920.

The striking employees paraded through the streets. Porches were blown off houses, houses burned and shots were fired. The entire town was in an uproar. The Pennsylvania Railroad Company obtained an injunction from the Federal Court banning the strikers from railroad property.

Two thousand rioters and sympathizers surrounded the Pennsylvania (aka Panhandle) Shops. Superintendent Judson called Jenkines and advised him of the situation. 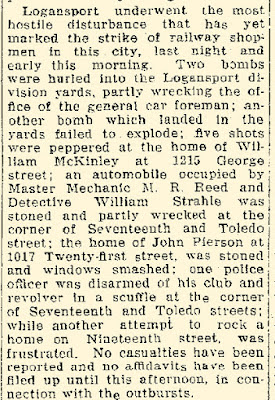 Jenkines went down to the area where he saw the crowd and witnessed several officers being threatened. He urged the crowd to go home. Eighty-one of the strikers were cited for the disturbance and contempt of the court order. 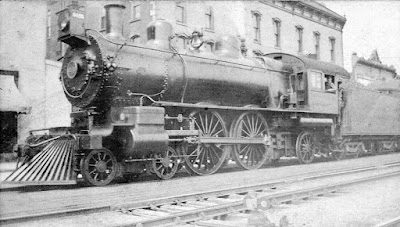 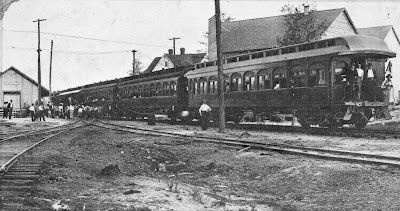 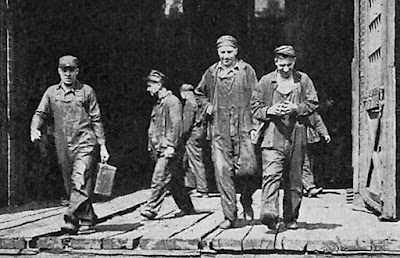 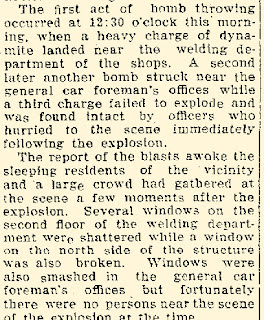 There were 97 railroad guards on duty in Logansport carrying clubs, pistols and shotguns all furnished by the Pennsylvania Railroad.

"Local policeman William VanMeter, working at the corner of 17th and Erie Avenue, was disarmed of his night stick and revolver in a scuffle with a crowd of men gathered in front of the soft drink parlor at this corner. VanMeter had ordered the group to move on and when he attempted to remove the men a scuffle took place." Logansport Pharos Tribune, 1922

A large number of men were sworn in to patrol the streets by local Sheriff, John H. Miller. Although a number of shots were fired no one was killed or seriously injured.

Jenkines went to Indianapolis and met with railroad Vice-President Rogers, He then met with the strikers of Logansport and explained the conditions that Rogers had presented. The local strikers were in favor of accepting those conditions.

Jenkines met with Pennsylvania Railroad executives in Chicago who refused to consider ANY deal that didn't have to do with the entire railroad system.

Railroad Vice-President Rogers died suddenly and that ended all negotiations. 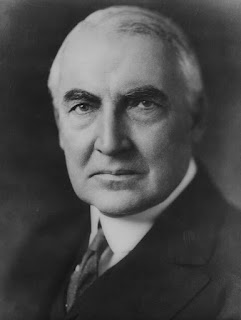 Ultimately United States President Warren G. Harding stepped in with a Federal Injunction. That effectively ended the strike on September 1, 1922.

Unlike the more famous flood of 1913, early forecasts concerning the 1943 version didn't have Logansport residents too concerned. Then the forecasts started including warnings that this may turn catastrophic. Eventually the '43 flood landed somewhere in between.

Heavy rain fell on May 11. Local weather observer Frank Elmlinger reported that the Wabash River was near flood stage. This prompted the closure or South River Road.

The next few days weather conditions remained dry. The river waters began to lower - river roads were reopened on the 13th.

The forecasts were thrown out the window on Sunday May 16th as heavy rain began to fall once again across Indiana. Unlike on the 11th, the rain continued.

The flood officially began on May 17 and waters would remain above flood stage until May 20th. The flood level in Logansport is 15.05 feet; Wabash River approached 17 feet on May 17th.

True to form - the first place to flood was the low lying area around Goose Creek on the city's south side. Washington elementary school was closed.

More than 500 homes within the city had water either inside their home or standing around it outside. A good portion of the downtown was also affected. 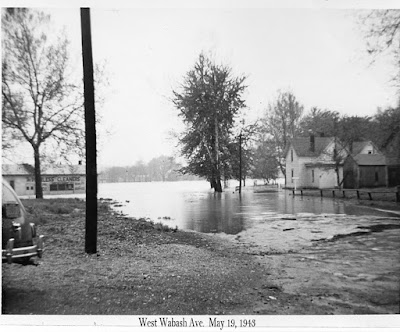 Personal Story:
Ray Hitchens - His family lived on the south side. He said that he and his family began loading everything onto a flat bed truck. When they began the ground was dry. By the time they had finished they had to wade out. 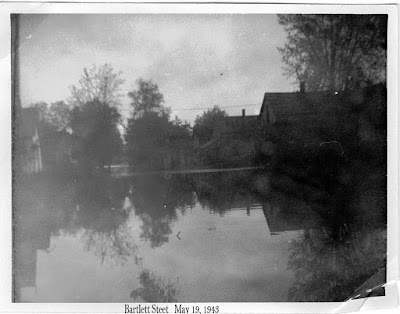 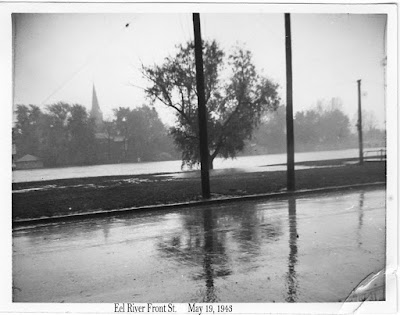 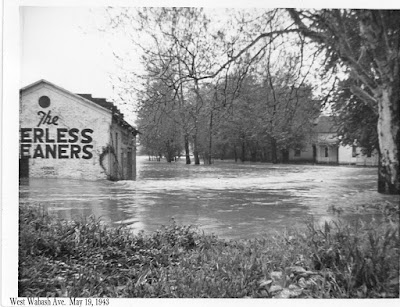 Conditions continued to deteriorate on the 18th. The local headlines read "Flood Rivaling 1913 Sweeps Thru Streets of Logansport", which prompted hundreds of families to flee their homes.

Late in the day of the 18th the rivers were hovering around 21 feet with the crest expected sometime around midnight, bringing 4 and 1/2 to 5 feet more water with it. IF that had happened this would've surpassed the 1913 flood by about a half foot. Instead the river stabilized at 21 feet, cresting at 21.4 on the 19th. 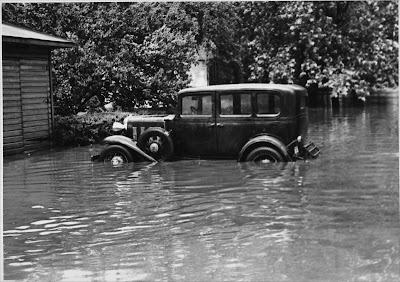 Personal Story:
One of Ray Hitchen's friends owned a model T which sat higher off the ground than newer cars. They drove the streets of the south side during the flood catching carp from the running boards. The two had to steer clear of the open manholes. 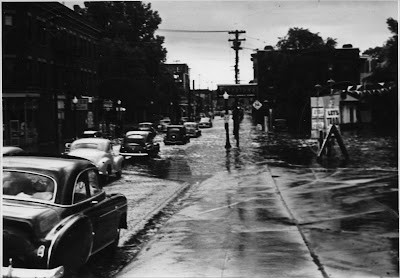 North Street looking west toward the Firestone Tire building on 3rd. This was a through street then. 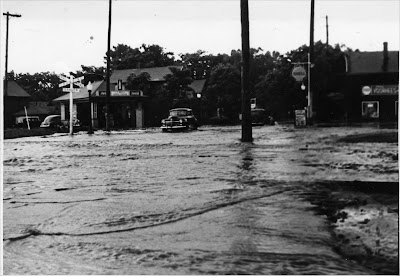 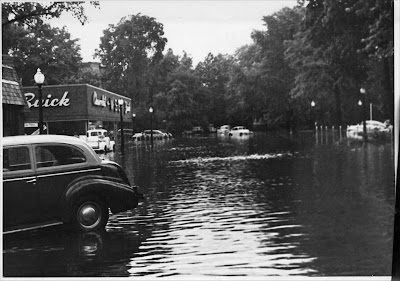 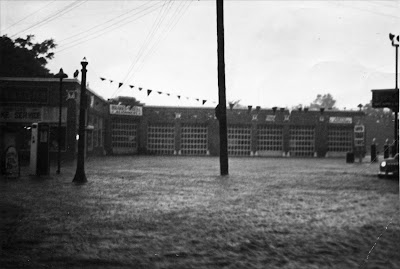 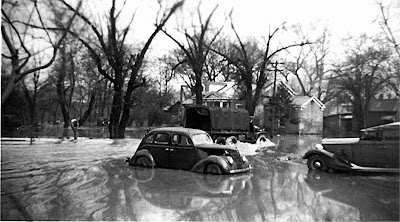 On Biddle's Island. The Biddle home in the background. (torn down in the 1960s) 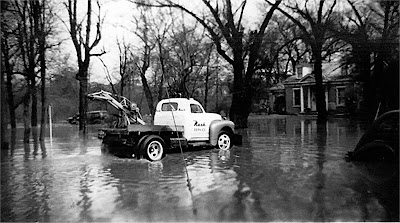 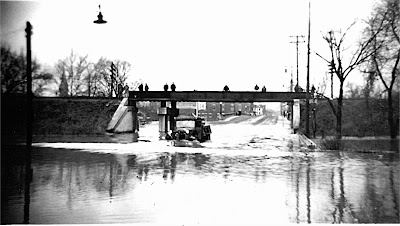 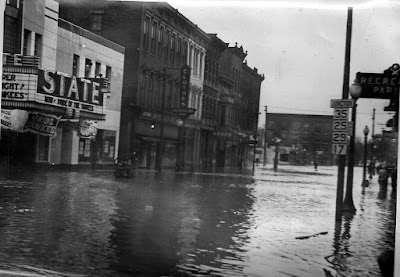 Personal Story:
Fred Harnasch worked at Todd's Appliances (see photo above)  At the time Todd's was located in a narrow building three doors east of 3rd Street; west of the State Theater. He recalled hauling the new merchandise from the flooded basement. A large amount of radios and parts, including invaluable tubes never made it out of storage. Those were held in high value during WWII because they weren't available to the public. 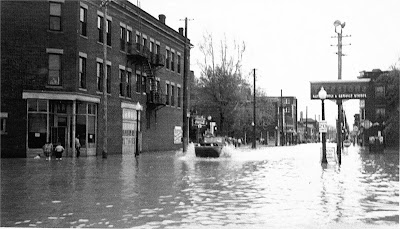 Personal Story:
Dan Wagner told of frantically removing his grandmother from her State Street home. Every flat bottomed boat was put to use in rescue and recovery of property. (note the boat in photo above - looking south on 3rd Street) 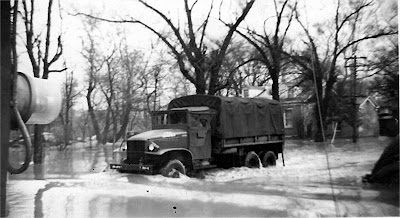 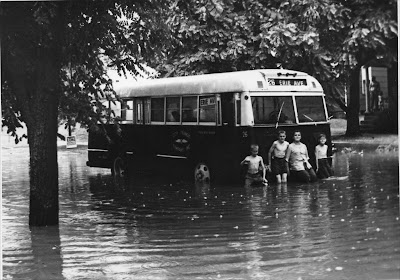 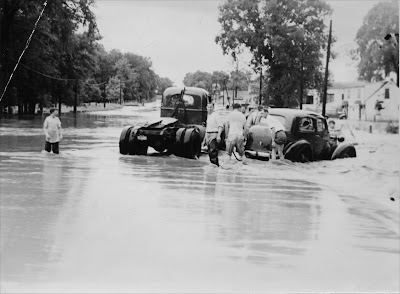 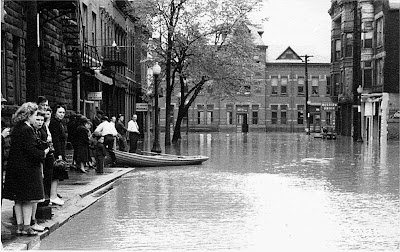 The Pennsylvania Depot at the south end of 4th Street.
Pharos tribune Shared Story:
At the end of the flood a certain WWII Army soldier passed through town via the railroad, wearing a helmet and carrying a duffel bag. When greeted by a pedestrian with a "Hi soldier" he replied "Hello and good bye. I'm getting out of your town right now." 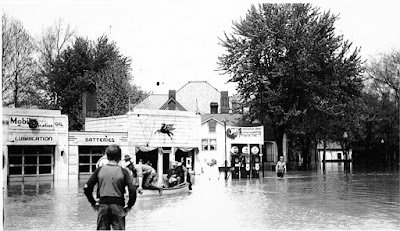 Personal Story:
Kenny Smith lived on W. Melbourne Avenue. His family home sat up higher than most, however they had a basement full of water. All of the family's canned goods were lost. Kenny also talked about what a difficult job clean up was. The first step was to find a pump, a difficult item to secure. After that the mud was removed by wheelbarrow loads! Mops with Lysol were then brought in to clean every inch of floor and baseboard. And after all of that, the odor remained. The Smith family didn't return to their home for ten days, mainly due to the smell.

It was on May 20, 1943 that the Pharos Tribune declared "Flood Damage Passed" and business "Open" signs started popping up on places such as Kraut and Baldini Groceries and Greensfelders men clothing store. Upper floor downtown apartment dwellers were able to move about the city for the first time in two days.

Thanks to Bryan Looker (former CCHS Curator), Enid Hunt, Fred Harnasch, Dan Wagner, Ray Hitchens and Kenny Smith - some of whom are no longer with us - for this account of the 1943 flood. All photos used here belong within the collection of the CCHS, donated by members over the years.