None of the principals Newton VanZandt, President, Adolph Monsen, Chief Engineer, and Gil Anderson and Thomas Rooney, Production Managers were originally from the Logansport, Indiana area. But when C. H. Wilson, a Chicago lumber company man, visited Logansport to survey an abandoned lumber yard and planning mill as a possible factory, he reported that there were enough local citizens willing to invest in the company to raise the funds for the building locally.

On August 25, 1917 the first bare chassis powered by a Duesenberg racing engine drove the streets of Logansport with Adolph Monsen at the wheel. That chassis was then driven to Racine, Wisconsin, where the body was installed and the finished auto was brought back and displayed at the 1917 Cass County Fair to much acclaim of the citizens.

March 1917, Headlines on page 1 of the Logansport-Pharos Reporter explained that the Logansport, Indiana "town fathers" were hoping to entice an auto factory to locate in this city. 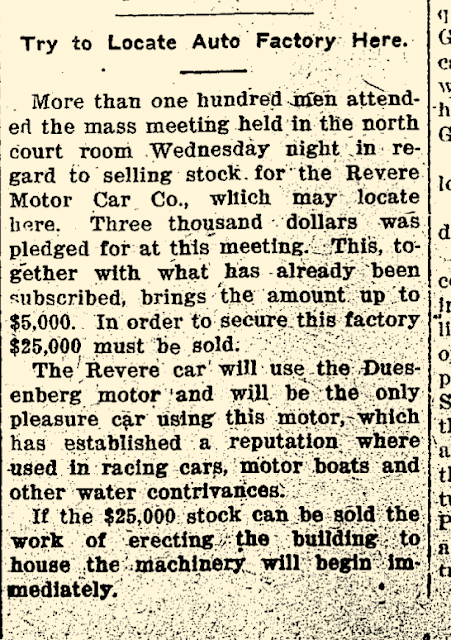 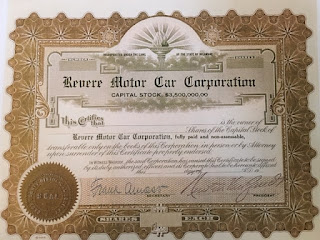 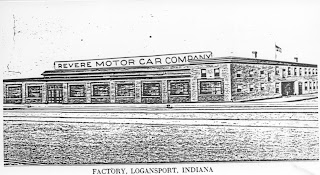 Above is a drawing of the plan for the proposed automobile factory.

Booster Committee Selling Stock Had $20,000 this Afternoon and Was Still Going Strong - In Good Shape 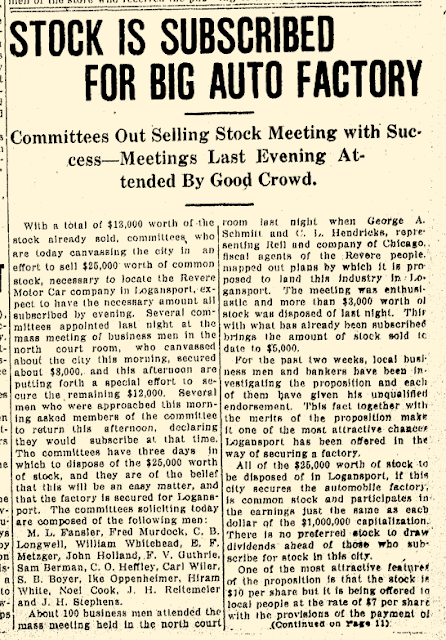 BIG HOPES FOR THE CITY

APRIL 2, 1917 LOGANSPORT PHAROS-REPORTER, PAGE 1:
"The Revere Motor Company will locate its plant at 'The Point' on the ground formerly occupied by the Bligh Lumber Company. This has been settled by the selling of $25,000 of stock in the city of Logansport and besides the sale of this necessary amount of stock, today a large number of subscriptions for stock in excess of the $25,000 was taken."
The Point was/is on First and E. Melbourne Streets at the confluence of the Wabash and Eel Rivers.
The article continues..."With the landing of this million dollar plant, the first appearance of the Greater Logansport is noted, and it is certain that following closely upon this will come other big projects and the city will begin to boom."

With the ink barely dry on the incorporation papers, ground was broken for the company's 33,000 sq. ft. factory complex on May 2, 1917. 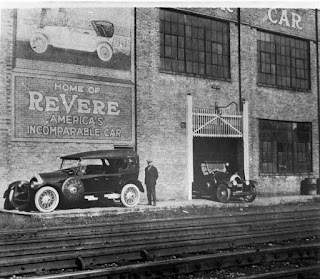 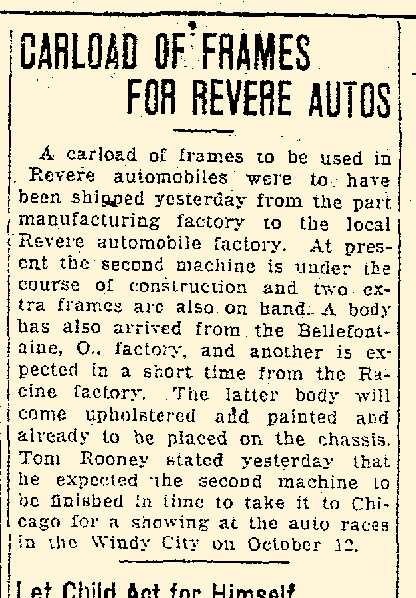 To promote the engineering and capabilities of the ReVere, VanZandt hired Erwin "Cannonball" Baker to drive a ReVere in what was promoted as the "Capital to Capital Test Trip". On June 12, 1918 "Cannonball" Baker left Indianapolis. He covered 17,000 miles, visited all 48 capitals ending on September 13, 1918, in Frankfort, Kentucky. 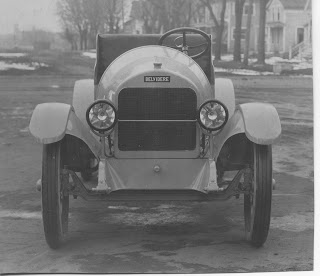 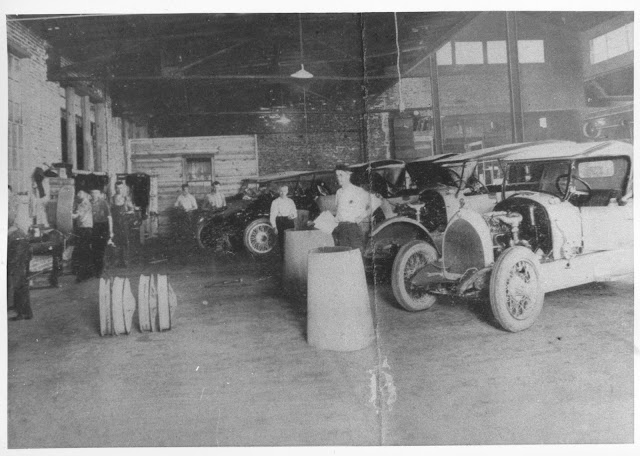 The first production ReVere rolled off of the line in the spring of 1919 at a base price of $3,850. Orders were being placed faster than the factory could produce them. Monsen insisted on personally inspecting each one. 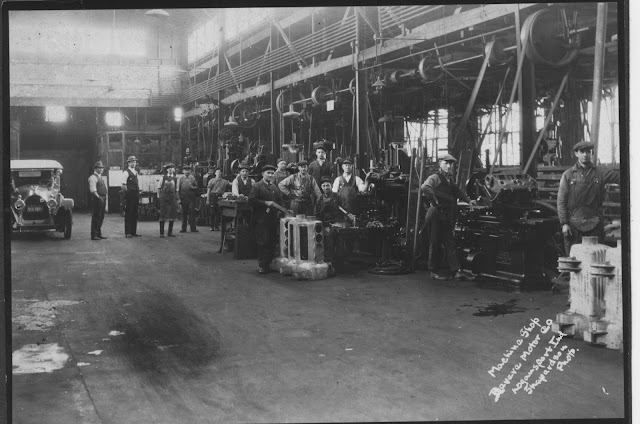 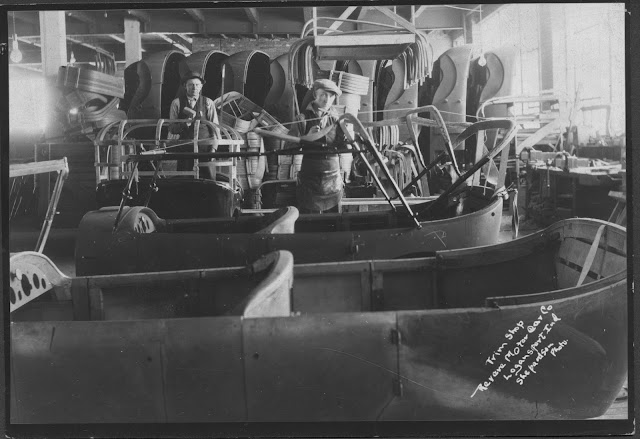 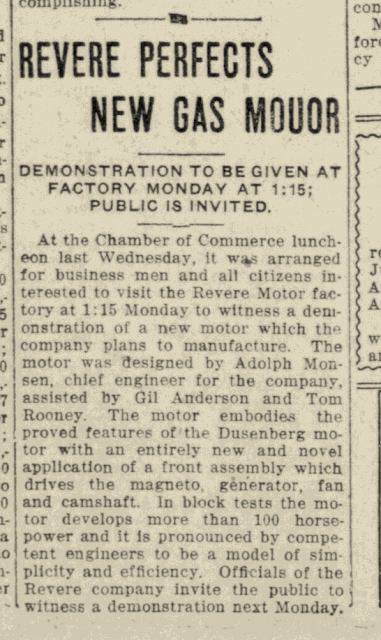 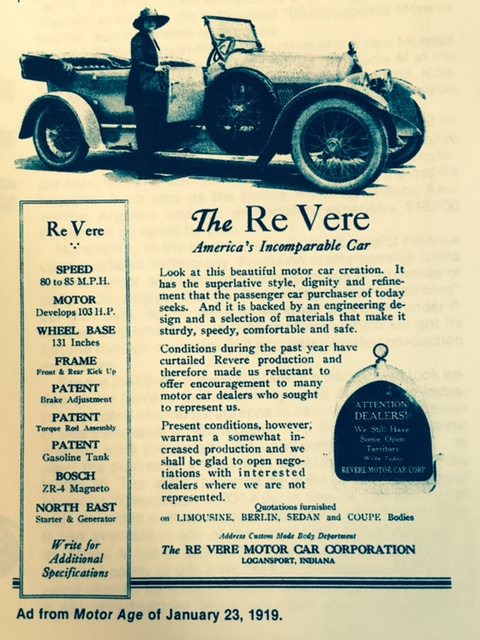 The ReVere was a well engineered, well built, quality automobile. Special order autos were built as well. King Alphonso XIII of Spain, a racing automobile enthusiast, ordered a model named the Sport Victoria at a cost of $7,800. In May 1920, ReVere sponsored a four cylinder Duessenberg racer at the Indianapolis 500. It was driven by Peter Henderson and finished 10th.

So why did the company last less than a decade and end in bankruptcy? Most historians  point the finger at the President VanZandt. VanZandt was an unscrupulous promoter who played fast and loose with the truth.

Advertisements of the ReVere bore no resemblance to the actual model built.
Protoypes were presented that had yet to be built in the factory.
Hard sell promotion turned to fraud when VanZandt claimed at a September 1919
meeting of the Logansport Industrial Association that an unnamed "Eastern
syndicate" had signed a five year contract to purchase $45 million worth of
ReVere Cars and that a deposit for 1,000 cars had been received.

After stock prices soared and investors scurried to get on board it was discovered
the "golden Eastern syndicate" was a dummy corporation set up by VanZandt himself.

Why bother? Maybe because of the strong belief in the automobile held by Adolph Monsen, who remained convinced of the car's quality, capabilities and continued promise. Monsen would assume greater visibility as vice-president and general manager of the newly-established ReVere Motors Co., Inc. Others involved at this point were Charles E. Barnes, President, Harry A. Kraut, treasurer and Fred J. Steffens, secretary. (Monsen's former co-partners, Rooney and Anderson, had left months earlier.)

For almost two years after the company had all but vanished.
The ReVere wasn't even regarded as a viable automaker- not surprising in view of its 16 car output in 1923.
"A mechanical dinosaur"
Unchanged almost since its inception, the car was of little interest even to those few who were aware of its existence. Honestly, the ReVere was outdated. More suited to the track than the boulevard, those to whom a $4,000 car appealed found more to their liking in a Lincoln, Marmon or Cadillac than in the ReVere. 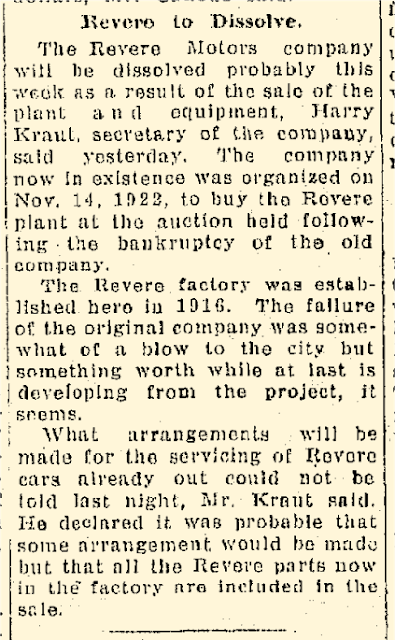 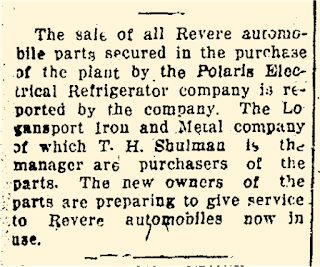 THE FOLLOWING PHOTOS OF THE AFTERMATH WERE
TAKEN BY THE FAMILY OF ROBERT KENDALL,
WHO LIVED NEAR THE BUILDING. 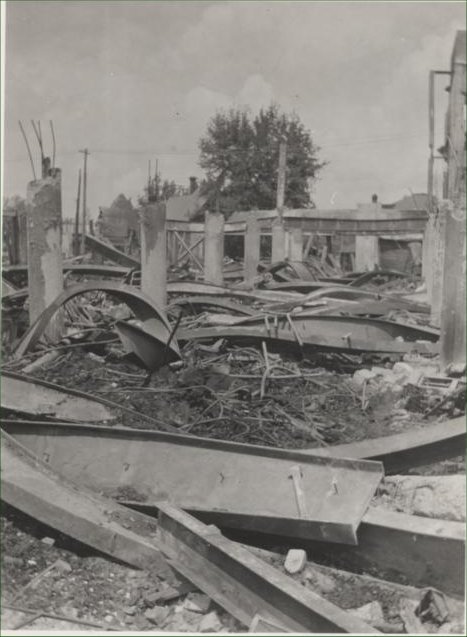 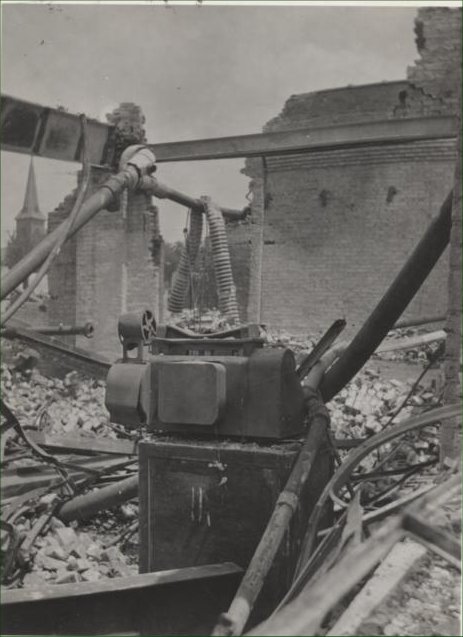 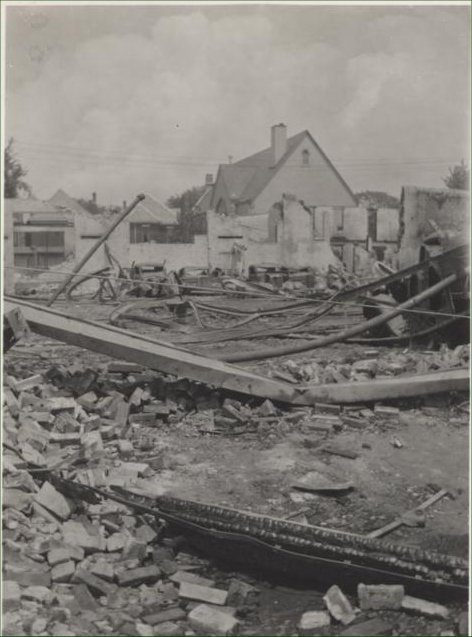 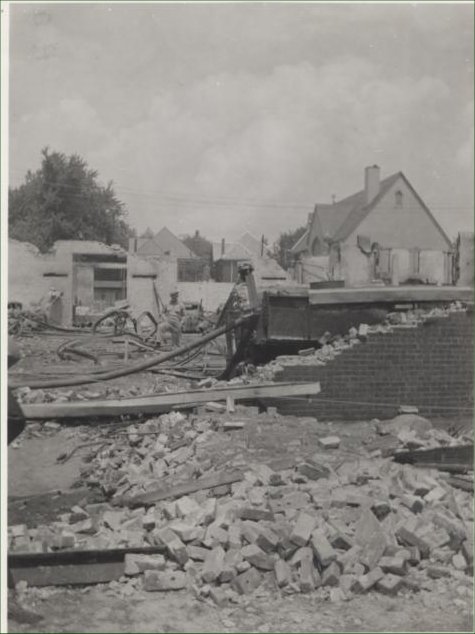 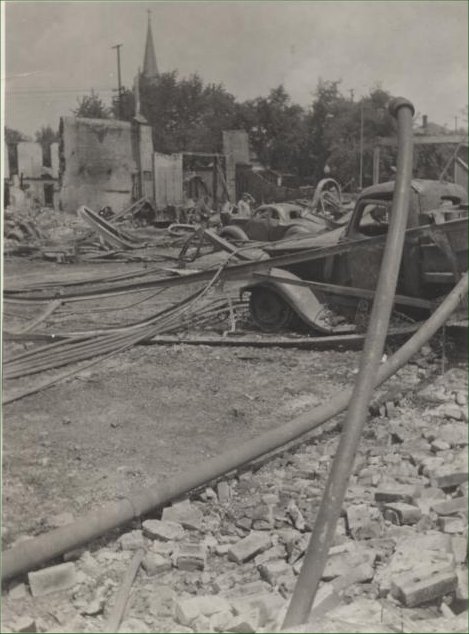 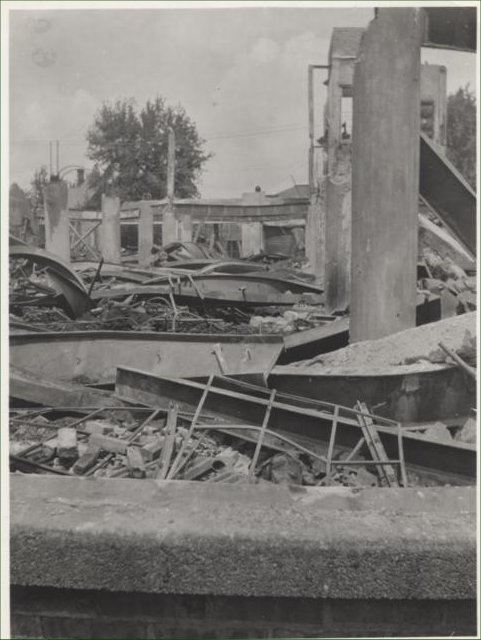 THE LOGANSPORT PRESS main headline for May 28, 1940 read “Local Fire Loss Fixed at $375,000”. The fire alarm came in at 3:20 a.m. and when fire fighters arrived the flames had spread through the corner of the building at 1st and E. Melbourne occupied by government entities renting office space from the buildings owner, the local contractor, James I. Barnes.
It was reportedly the worse fire in Logansport’s history and wiped out almost a complete half block of Barnes’ factory buildings.

Occupants of the buildings, besides Barnes were Shulder & Schloss garment factory; RBM Manufacturing warehouse, and the U.S. government conservation quarters.

The fire spread so quickly that by 4:30 a.m. the three-story brick and concrete structure adjoining on the west, was in ruins, and the RBM warehouse even further west was a mass of flames. It was quite a battle, but the fire fighters managed to save the Small Bakery building at the end of the string.

Witnesses said that all three floors appeared to take fire all at once. With the building blazing, the brick structure to the west was doomed. All was destroyed.

Elliott Wholesale warehouse faced 1st Street and burned quickly. The fire was accompanied by the explosion of gasoline tanks in cars and the bursting of canned goods in the grocery warehouse. 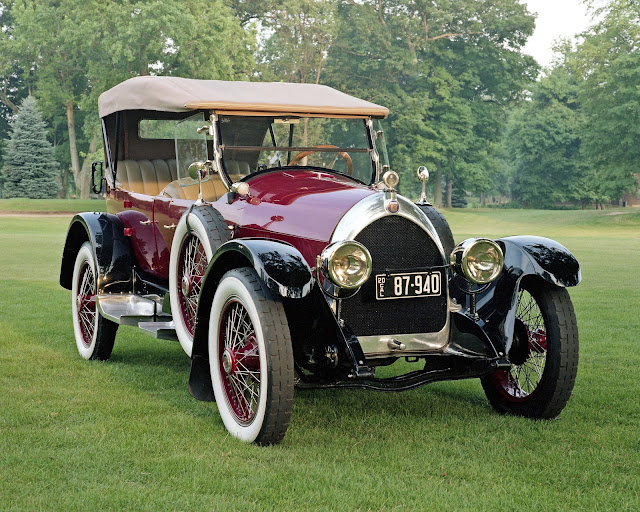 Above: In 1998 the citizens of Logansport and Cass County, Indiana worked together to raise money to purchase this 1920 touring car ReVere (photo credit Rich Voorhees Studio) from a private individual living in Nevada. It is now among the Cass County Historical Society collection. This year, 2017, the CCHS and community will celebrate the short-lived company's history on August 26. MORE TO COME....

Posted by Museum Director T Conrad at 1:40 PM No comments: